The Roman Catholic Diocese of Helena has filed a bankruptcy reorganization plan that proposes a $16.4 million settlement for hundreds of people who said clergy members sexually abused them for decades while the church covered it up.

The plan, filed late Monday, calls for the 362 victims identified in two lawsuits filed in 2011 to receive a minimum payment of $2,500 each. An abuse-claims reviewer will determine the actual payment based on the severity and long-term effects of the abuse. The plaintiffs’ attorneys, unsecured creditors and any future abuse claims also will be paid out of the trust.

“As attorneys for the victims, we are relieved that this long battle is finally coming to an end,” Seattle attorney Timothy Kosnoff wrote in an email to The Associated Press on Nov. 14. He expected the plaintiffs to be paid early next year. 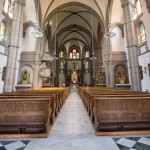 The settlement was reached through mediation, but it still must be approved by the creditors, including the plaintiffs in the lawsuits who said they were abused from the 1940s to the 1970s.

Bishop George Leo Thomas expressed “his profound sorrow” and apologized to the victims in a news conference in January announcing the settlement.

“I know the pain is real, the pain is in the present tense, and in the name of the church, I want to say I’m sorry and we’re sorry as a church,” Thomas said at the time.

The plan also calls for a wrongful-discharge lawsuit filed by former Butte Central teacher Shaela Evenson to be allowed, with any judgment being subject to the limits of an insurance policy. Evenson sued after being fired from the Catholic school for being unmarried and pregnant. In March, she gave birth to a son, the first child for her and her partner, Marilyn Tobin.

The diocese issued a statement Tuesday saying it could not immediately comment on the plan, which does not accept any liability for a 2012 lawsuit filed against the Ursuline Sisters of the Western Province.

The proposed $3.5 million loan from Placid Enterprises LLC would be secured by diocese-owned buildings including the bishop’s $367,000 residence, other property and Legendary Lodge, a church camp on Salmon Lake valued at $3.6 million. The loan has a 5 percent interest rate and requires monthly payments of nearly $14,600 for five years.

The diocese said it was minimizing expenses and, with increased donations, was confident it could successfully reorganize its finances, the filing said.

Helena’s diocese was the 11th in America to seek bankruptcy protection in the face of sex-abuse claims.