A Pacific storm moved into drought-dry California on Tuesday, bringing hopes for much-needed moisture but fears of mudflows on wildfire-scarred hillsides.

Light rain began falling before sunrise, but the heaviest downpours were expected later in the day.

Storm watches were posted for a large swath of the Sierra Nevada, where a huge amount of the state’s water supply is normally stored as snowpack. Significant accumulations were predicted but not enough to be a drought buster.

Any delight over the prospect of beneficial precipitation was tempered by concerns about the threat of debris flows from the many areas of California where wildfires have burned away vegetation that would keep soil stable. 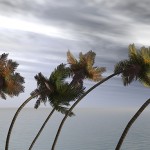 A weak storm Sunday was enough to block Pacific Coast Highway west of Malibu with a flow of mud from a section of the steep Santa Monica Mountains denuded by a 44-square-mile fire last year.

The muck was cleared but debris basins that overflowed were still full and will keep the highway from reopening anytime soon.

“We’re going to have to wait until the next storm passes,” said Patrick Chandler of the California Department of Transportation.

Residents prepared for Tuesday’s storm by placing sandbags to protect properties in foothill cities northeast of Los Angeles, where some communities below steep mountains have long lived with concrete barriers lining streets in hopes of keeping debris flows out of homes.

Back-to-back storms are helping some cities in northwest California reach normal rainfall amounts for the year, or even better, but the reservoirs and Sierra snowpack that provide much of the state’s water remain far short of what they should be after three years of intense drought.

The state Department of Water Resources reported the Sierra snowpack, which counts most for the state’s water supply, was at 24 percent of normal for this time of year.

Rain so far, at this early point in California’s wet season, has yet to make much of an impact on the state’s main reservoirs. Lake Shasta and Lake Oroville have less than 50 percent of their usual water levels for the start of December, while Folsom Lake stands at 59 percent, National Weather Service forecaster Eric Kurth said.

“The good news is there’s more storms on the way,” Kurth said.

Some Reinsurers Will Try Pandemic Exclusions for Casualty at Jan. 1 Renewals