The number of people who died in crashes in Nevada went up in 2014 compared with the year before, but it’s still down significantly from its peak in 2006, according to state data released this week.

“These are so much more than numbers. Every death and serious injury on Nevada roads is a tragedy,” NDOT Director Rudy Malfabon said in a statement. 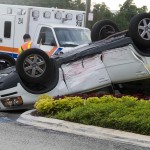 The latest number is preliminary in part because some people injured in crashes in 2014 might later die of those injuries. For example, the state’s preliminary number last year was 259, but eight more deaths were tallied after early January.

Among the findings in the 2014 report:

It’s hard to draw conclusions about why 2014 was a deadlier year than 2013 because so many different factors contribute to each crash, said Meg Ragonese, spokeswoman for NDOT.

But surveys indicate that Zero Fatalities, a state-run campaign that places billboards and other ads to encourage road safety, is changing bad habits, Ragonese said.

Messages from Zero Fatalities reached 98 percent of state residents in the past year, she said. Seventy-seven percent of survey respondents in 2014 said the messages influenced them not to drive distracted, compared with 55 percent in 2013. The number of people who said the campaign affected their decisions about driving impaired rose from 52 percent to 61 percent.

“Zero Fatalities is not only reaching the majority, but they’re saying it’s influencing them to drive more safely on Nevada roads,” she said.

There’s still too little data to know whether laws passed in recent years, including a three-year-old ban on using a hand-held phone while driving, are curbing distracted-driving crashes, said Traci Pearl of the state Office of Traffic Safety. Distracted driving is notoriously difficult to track because drivers don’t always admit they were using a phone or doing something else before a crash.

What’s easier to track is whether a person was sober or wearing a seatbelt.

“If everyone would do those two things, we wouldn’t have two-thirds of these deaths,” Pearl said.