A lawyer for the Utah family of a contract worker at a Nevada gold mine that paid more than $100,000 in U.S. safety fines after he was killed there in 2011 says they’ve settled a wrongful death suit with Newmont USA, subject to a judge’s final approval.

Newmont had claimed a tire repair contractor held any civil liability for its 21-year-old employee overcome by toxic fumes while fixing a giant tractor tire in a shop at the open pit mine about 275 miles east of Reno. Its lawyers argued that further punishing the Denver-based mining company would “set bad public policy” and ultimately could undermine workplace safety.

The U.S. Labor Department’s Mine Safety and Health Administration earlier fined Joe Ashdown’s employer, Purcell Tire & Rubber Co. of Potosi, Missouri, $168,000, and Newmont $112,000 for violations related to his death. The agency concluded he died because of the negligent failure of both companies to take adequate steps to protect employees from toxic chemicals at the South Area mine near Carlin.

Randall Edwards, a lawyer representing Ashdown’s estate and his minor son, confirmed the two sides had reached an agreement, pending final approval as early as this month. He said he couldn’t discuss terms of the “confidential settlement.” 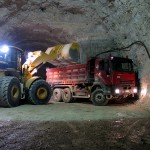 “It has been resolved,” Edwards told The Associated Press from Salt Lake City. “Obviously we would not have settled if it was not acceptable. Otherwise we would have gone forward to trial.”

Last week, U.S. Magistrate William Cobb ordered both sides to file in U.S. District Court in Reno by Thursday any stipulations to Newmont’s earlier motion to dismiss the lawsuit seeking unspecified damages based on the pending settlement.

MSHA said Newmont management was guilty of aggravated conduct that went beyond ordinary negligence because it was “aware of the hazardous chemical being used, yet failed to ensure the control of exposure.”

The agency also faulted both companies for assigning Ashdown – who had worked for Purcell for about 10 months after moving from Roseburg, Ore. – to “perform this task alone, using a hazardous chemical inside a tire, where he was unable to communicate, be heard, or be seen by others after he was overcome by the vapors.”

The lawsuit, filed on behalf of Ashdown’s widow, Jasmyne Borden, and son, cited MSHA’s conclusion that Newmont’s training of Ashdown didn’t comply with agency requirements for the safe repair of tires with a glue that included trichloroethylene (TCE). A co-worker found him unconscious face down in the 3-foot-wide well of the 12-foot-tall wheel. The respirator he was supposed to be wearing was found nearby.

“There is no indication that Joe was ever trained by anyone on the use of the respirator, or the circumstances under which respiratory protection should be used,” the lawsuit filed in May 2013 said.

Newmont’s lawyers first notified the judge of the pending settlement Sept. 17. Two days earlier, they had argued in a motion for summary judgment that the company had helped obtain workers’ compensation benefits for Ashdown’s family even though it wasn’t responsible for either Purcell or Ashdown failing to take the proper safety precautions at the mine that employed more than 1,000.

“The only link between Newmont and Ashdown’s unfortunate death is the fact that Ashdown’s death occurred on Newmont’s premises. It is abundantly clear that Ashdown’s death was caused by his failure to wear a respirator while repairing tires,” Las Vegas attorney Jeremy Beal wrote Sept. 15.

“To hold Newmont liable for Ashdown’s failure to wear his ventilation mask … would set bad public policy as it would dissuade property owners from ever establishing safety procedures for their contractors’ employees if it meant that they would be liable for the employee’s refusal to comply with employer’s directives,” he said.