About 5,500 more people could survive a major tsunami hitting the Pacific Northwest if they just walk a little faster to higher ground after roads are knocked out, a new study shows.

The report published Monday in the Proceedings of the National Academy of Sciences looked at 73 communities along 700 miles of coastline in Oregon, Washington and Northern California. The area is considered most at risk from the next major earthquake and tsunami in the Cascadia Subduction Zone, where two plates of the Earth’s crust come together miles off the coast.

Emergency preparedness experts generally agree that after the quake and tsunami, most roads will be too damaged for driving, so people will have to walk to safety.

Geographers estimated 21,562 residents would not make it to safety if they walk slowly – at about 2.5 mph. But if they walk faster, at about 3.5 mph, the death toll drops to 15,970. About 70 percent of them would be in Washington, nearly 30 percent in Oregon and only 4 percent in California. 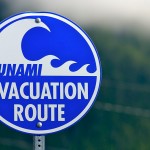 The study said people working or staying at motels in the tsunami area also will be at risk, but it didn’t say how many. It also noted where communities have dependent-care facilities, where residents might have trouble walking.

Lead author Nathan Wood, a geographer for the U.S. Geological Survey in Portland, Ore., said the findings show tsunami risks are a public health issue as well as an emergency preparedness issue. Promoting healthy lifestyles that help people walk faster would save lives.

Wood added the study provides the most detailed look yet at tsunami risks, and should help in planning evacuation strategies and educating the public.

“People kind of know that Ocean Shores and Long Beach, Washington, and Seaside, Oregon, have issues” because higher ground is too far to walk in the time before a tsunami hits, he said.

“What we wanted to show is that all the communities have issues from Cascadia, but they are different issues,” Wood said.

The Cascadia Subduction Zone runs offshore from Cape Mendocino, California, to Vancouver Island, B.C. It is the place where the rocky plate underneath the Pacific Ocean pushes under North America. On average, it breaks loose every 300 to 600 years, and it last released 315 years ago, generating a magnitude-9 earthquake and a tsunami that washed away houses in Japan.

After feeling the quake, people in the tsunami area have about 15 minutes to reach higher ground before a wall of water 30 to 40 feet high washes ashore.

Althea Rizzo of the Oregon Office of Emergency Management said the study offered the best look yet at how many people might be in the highest-risk tsunami zones.

“Most of our evacuation modeling is based on an average,” she added. “Nate’s work gives us a better look at how different speeds (of walking) affect survivability.

“It really gives the individual a lot of information about how to survive these types of events.”

The study also provides better information to look at which communities might consider strategies like vertical evacuation, where buildings or mounds of earth are constructed as places to escape the tsunami, said John Schelling, earthquake, tsunami and volcanos program manager for Washington Emergency Management.

Schelling noted Ocasta Elementary School south of Westport, Washington, is building a new gymnasium tall enough for the roof to serve as a tsunami evacuation structure. Pacific County is seeking a grant to build a large berm next to Long Beach Elementary School for the same purpose.

The study said evacuation training might be the focus for Aberdeen, Washington, and Eureka, California, which have the highest numbers of people in tsunami zones, but they have time to reach safety. Vertical evacuation structures might be considered in Ocean Shores, Long Beach and Pacific County, Washington, and Seaside, Oregon, because many people in those cities lack enough time to reach safety.