Legislation to allow lawsuits against Colorado schools when there are shootings or other violence was signed into law this week by Gov. John Hickenlooper.

With the law, Colorado will be among a few states that allow school lawsuits for cases of violence. At least 33 states limit monetary damages that may be recovered from judgments against the state.

Lawsuits would be limited to $350,000 per victim or $900,000 per incident when there are serious injuries or deaths from violence and the school is accused of negligence.

“Certainly for our children to learn and to grow, we need to make sure that we ensure their safety,” Hickenlooper said moments before signing the bill at the state Capitol.

Schools opposed the bill, saying it would increase their insurance liability and wouldn’t prevent violence. 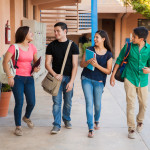 The measure is named for Claire Davis, who was killed at Arapahoe High School in 2013. She was shot by a fellow student who then killed himself.

Davis’ parents have argued that the school ignored signs that the 18-year-old shooter planned to kill fellow students.

Authorities say Karl Pierson targeted his debate coach when he entered the school with a shotgun, machete, homemade bombs and 125 rounds of ammunition on Dec. 13, 2013. The coach was unharmed.

School officials did not punish Pierson after he shouted a death threat against the coach months earlier in a school hallway. Administrators deemed Pierson low-risk, despite a threat-assessment that showed a history of violent behavior and angry outbursts. The district has declined to comment about the case.

Hickenlooper also signed a companion measure to the Claire Davis bill. The second bill creates a legislative committee that will meet this summer to study how to improve school safety and threat assessments.

The topic is one that lawmakers and school officials have been wrestling with for almost two decades since the Columbine High School mass shooting in 1999.

“These bills are going to help us make some real progress in making sure we’re doing everything we can to prevent school violence,” Hickenlooper said.

Davis’ parents were a driving force behind the bill, and they attended the signing ceremony.

“We now have a path that will enable all of us to change the direction and culture in Colorado schools,” said Davis’ mom, Desiree Davis.