New research shows floods like the one that ransacked northern Colorado two years ago, killing 10 people, might be more common than previously thought _ and that could require more homeowners to get flood insurance and trigger more stringent construction rules.

The September 2013 flood caused $3 billion in damage to neighborhoods, highways, farms and oilfields. Nearly 2,000 homes were damaged or destroyed, many in small mountain towns.

Early, rough estimates of the flood indicated it was a 1-in-500 event, meaning the chances of such a deluge in any one year are 1 in 500.

But recently completed studies of the Big Thompson River, St. Vrain Creek and other hard-hit waterways show it was mostly a 1-in-100 event, said Kevin Houck, chief of watershed and flood protection for the Colorado Water Conservation Board. 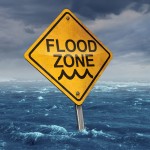 If a 1-in-100 flood can cause that much havoc, then homes, roads and other infrastructure are more vulnerable than previously believed, he said.

A 1-in-100 flood is sometimes called a 100-year flood, but experts say that’s a misnomer. The ratio refers to the chances of such a flood occurring in any single year, based on historical data. A 1-in-100 flood could happen more than once a century.

The Federal Emergency Management Agency is reviewing the new Colorado data and will likely use it to revise its maps designating flood plains _ areas that are most prone to flooding, said Ryan Pietramali, FEMA’s regional chief of risk analysis.

The maps are important because anyone who has a federally insured mortgage and who lives in a FEMA-designated 1-in-100 flood plain must buy federal flood insurance. If the new maps show a bigger flood plain, more people would have to buy coverage, which averages about $1,300 a year for homes in high-risk areas.

Flood plain maps have been redrawn across the country after other natural disasters, including along the Mississippi River after Hurricane Katrina in 2005 and in some mid-Atlantic states after Hurricane Floyd in 1999.

Many local governments also use FEMA’s maps to determine what building requirements must be met for new construction, such as how high the floor must be to avoid flooding.

“If the maps changed and your area was now in a flood plain, the flood plain requirements would kick in,” said Terry Gilbert, director of community development for Larimer County, which saw heavy flooding along the Big Thompson and Little Thompson rivers in 2013.

Houck said the reason for the revised expectations isn’t climate change or weather patterns but improved data. The previous expectations were based on 30- or 40-year old studies that used methods now considered obsolete. They also had less history to draw from.

It’s too early to know how many more homeowners might have to buy the insurance if flood zones are redrawn. New FEMA maps could be three years away because the agency must review the state data and then give residents and local officials a chance to comment and appeal.

Some communities aren’t waiting. The city of Longmont is drawing up plans to rebuild St. Vrain Creek through the city to handle the new, increased estimate of how much water the creek would carry in a 1-in-100 flood. The first phase of the $100 million project is expected to start next year, with a goal of preserving the creek’s natural look, said David Hollingsworth, the city’s flood plain manager.

The Water Conservation Board released the first of its studies of the 2013 floods this summer, covering six rivers and creeks that flow into the South Platte River, including the Big Thompson and St. Vrain. A study of the South Platte as far as the Nebraska state line is expected later this year.

The research shows some small areas were in fact hit by a 1-in-500 flood, notably Lyons, in the Boulder County foothills, and some portions of the South Platte, Houck said. But those were exceptions.

“I would say the best way to characterize this storm is a very unusually widespread 100-year event with some small pockets of a 500-year event thrown in there,” he said.