Federal emergency officials are urging Californians to buy flood insurance – even those who don’t live near creeks or rivers – as El Nin᷈o conditions get underway in the Pacific Ocean, increasing chances for heavy storms this winter.

“If there ever was a time to buy flood insurance, this is that time,” Wright said.

Since 1978, 37 percent of all flood insurance claims in California have come as a result of just two winters, 1982-83 and 1997-98 – the last two times that strong El Nin᷈o conditions similar to what’s forecast for this year have occurred. In both of those winters, pounding rainfall caused flooding, mudslides and other damage across the state. 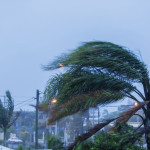 Forecasters say that January, February and March are expected to get the brunt of this winter’s heavy rainfall across the state.

There is a 30-day waiting period for new flood insurance policies to go into effect, Wright said.

California’s current four-year drought, and the nearly 20 years that have passed since the state experienced punishing winter rains, have made many residents downplay or forget that wet winters historically have caused major destruction and fatalities.

“People always say ‘I never thought this would happen to me,”‘ said Nancy Kincaid, a spokeswoman for the California Department of Insurance. “But if it does, are you prepared to recover without insurance? It can be thousands, or even hundreds of thousands of dollars.”