A federal jury in Seattle, Wash. awarded $21.5 million in damages to an Illinois man who was injured by an automatic sliding-glass door on a cruise ship in 2011.

The verdict included $16.5 million in punitive damages. James Hausman’s attorneys argued during a nine-day trial that dozens of other passengers have been injured by the doors on Holland America Line cruises because of problems with their sensors, The Seattle Times reported on Tuesday.

The company has denied that claim and asked the court to reduce the judgment. It says it will appeal.

Surveillance video shows Hausman, 61, of Springfield, Illinois, walking through an automatic door when it shut on Nov. 26, 2011, as the M/S Amsterdam approached Hawaii. Hausman, who was traveling with his wife and daughter on the beginning leg of a cruise around the world, got hit in the face and side of the head. 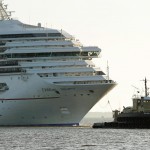 Holland America said in court documents that Hausman walked into the closing doors.

A ship doctor diagnosed him with a concussion, and he finished the trip. But Hausman’s attorneys say tests later showed that he suffered a minor brain injury that has caused seizures, memory loss and vertigo.

“He still has trouble with things that would have been simple before,” said Hausman’s lawyer, Rick Friedman, adding that his client has sold his gold and precious-metals retail business.

Friedman alleged that Holland America did not reveal documentation on up to 34 other sliding-door incidents throughout its fleet going back three years. U.S. District Judge Barbara Rothstein allowed the jury to hear about 16 of those incidents that she decided were relevant.

Motion sensors on the doors were set to open and close faster than normal, Friedman said. Holland America denied that allegation said it had no comment on the specifics of Hausman’s lawsuit.

“Holland America Line is committed to the safety and security of our guests and take all incidents very seriously,” the company said in a statement.