The organizers of Salt Lake Comic Con said they have made inroads in a name-trademark dispute that all hinges on a hyphen.

Bryan Brandenburg, co-founder of the Utah convention , said last week organizers recently met with representatives from San Diego Comic-Con International about a possible settlement in a lawsuit over the use of “comic con.”

“We met with the principal of San Diego Comic-Con in negotiating settlements and have made significant progress,” Brandenburg said.

San Diego Comic-Con filed a trademark violation lawsuit against the Salt Lake convention in August 2014. San Diego’s organizers say they have legal ownership of the term “comic con” in all its forms, the Deseret News reported. However, the convention only owns the rights to “comic-con” with a hyphen. The San Diego enterprise gave up a bid in 1995 to trademark “comic con” with a space. 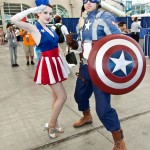 Meanwhile, the U.S. Patent and Trademark Office last week suspended its own ruling until the federal case is resolved. In July, the office sided with Salt Lake and awarded it a trademark for its name. Officials said “comic con” was too generic to trademark but “Salt Lake Comic Con” was specific enough to qualify.

The long-established San Diego Comic-Con started in 1970. Since then, it has grown into the Holy Grail of pop culture conventions, drawing self-described geeks as well as Hollywood studios and actors looking to create buzz for upcoming projects.

In comparison, the Salt Lake Comic Con debuted in September 2013 with an estimated 72,000 people turning out. More than 120,000 people attended the three-day convention the following year.