In the strongest indication yet that the California drought could be easing, officials said strict water conservation orders could be dramatically scaled back or even ended if El Niño storms keep pummeling the state into the spring.

The assessment came amid encouraging results from this week’s measurement of the Sierra Nevada snowpack, which provides a third of the state’s water during the spring runoff when it feeds rivers and replenishes depleted reservoirs.

The water content of the snowpack now stands at 130 percent of normal for this time of year.

“We are hopeful that we are turning the corner on this drought,” State Water Resources Control Board chair Felicia Marcus said in a statement. “The truth is that it’s just too soon to tell.”

The board exercised caution Tuesday when it extended an emergency conservation order by Gov. Jerry Brown that requires communities to cut water use by 25 percent in response to the four-year drought. 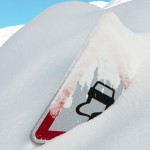 Come April, when the snowpack is typically at its highest level, officials intend to revisit the conservation plan. By then, they should know the full impact of the heralded El Niño system, a warming of the Pacific Ocean that alters weather worldwide and is associated with stormy California winters.

Brown ordered the cutbacks last year, saying mandatory conservation was imperative because the drought could drag past this year.

The effort slipped in December when residents and businesses used 18 percent less water compared to the same period of 2013. It was the worst showing since Brown set the goal in June.

However, the state is still on track to beat Brown’s goal, officials said.

In extending the conservation order, the water board gave a slight break to cities that are particularly hot and dry or quickly growing.

Places that have implemented desalination or developed efficient ways to recycle water also received consideration on their conservation mandate.

Officials said the conservation goal could drop closer to an average of 20 percent statewide after the breaks are implemented.

He said his district invested $120 million in groundwater storage a decade ago, making Sacramento drought-proof.

“We did precisely what we were supposed to do,” Roscoe said. “We anticipated a drought, were proactive and we made a huge investment.”