Students at San Francisco State University will have to come back from the future now that hoverboards have been banned from campus due to fire concerns.

Administrators informed students by email Monday that the two-wheeled, self-balancing devices are prohibited on school grounds and in dormitories, the San Francisco Chronicle reported.

The boards are popular but have been linked to fire hazards. The U.S. Consumer Product Safety Commission issued a letter Thursday noting 52 reports of fires that users say were caused by hoverboards in 24 states. The government says it will seize or recall any boards that fail to meet federal safety standards.

In January, an alert homeowner in Sonoma County saved his house after finding his daughter’s hoverboard shooting sparks. 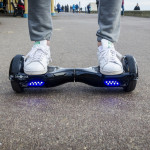 Yet on Thursday, the newspaper said, dozens of bicyclists and skaters rolled through the main quad. A hoverboard was nowhere in sight. Students expressed mix opinions about the new rule.

“They don’t say much about the skateboards everywhere, so I don’t see the problem with hoverboards,” said student Wajma Naik, 20. “It’s not like they’re racing down anything.”

Thandiwe Cato, a 21-year-old business student, said she liked the hoverboard ban because it might make it easier for walkers.

“I’m not going to say I don’t like hoverboards, because I’ve never tried one,” she said. “But anything that gets in my way as I’m walking to class I do not like.”

The use of hoverboards is legal on California streets and bike lanes. Riders must be over 16, wear a helmet and ride on a road with a speed limit no higher than 35 mph.