Fire chiefs in rural Cache Valley say when someone calls 911, they always manage to send a team to help, but the harsh reality is they don’t have enough volunteers to handle daytime calls.

“It’s a tough time to scare up volunteers,” Mendon Fire Chief Ray Olsen said. “We’re all out doing what we do to make money to take care of our families.”

Olsen is self-employed, working as a contractor in the construction industry. It gives him the flexibility he needs to serve as a volunteer firefighter, a field he has given his time to for more than 40 years, the Herald Journal reported.

There are currently 19 volunteers on his roster, and in an ideal world, Olsen would like to have 40 to 50 people on that list. But everyone who is trained has to be outfitted with the proper, very costly fire gear, so he would settle for about 25.

Therein lies two of the most noted challenges faced by small, rural fire departments in Cache Valley, as identified by the chiefs in charge of them. Their most valuable resources – people and money – are limited. It can be difficult, dirty work that takes them away from their families, without compensation.

“Being a volunteer firefighter requires commitment, time and effort and those involved need to be willing to attend training, and learn the skills to do the job safely,” said Newton Fire Chief Greg Jorgensen.

“The need to have people willing to serve is great,” he said. “Unfortunately, in today’s world it seems that people are just too busy.” 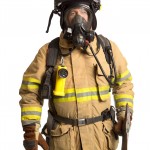 Even so, there are many who happily make the choice to serve.

While 19 firefighters sounds like a healthy number for a town the size of Mendon, the reality is that most of them work outside of the small bedroom community. So, there might only be one or two people available for daytime calls.

While Richmond is roughly twice the size of Mendon by population, its fire department faces the same struggle.

Fire Chief Dennis Wood said there are 14 on his roster. One of those people is available for day calls. Another firefighter works rotating shifts out of town and is available periodically.

“I think that past generations had a greater sense of the importance of serving on the fire department,” said Jorgensen, of Newton. “Being a member of the fire department is a big commitment, it is a serious business; people’s lives and property are at times on the line.”

Fortunately, all of the fire departments in Cache Valley participate in a mutual aid agreement that sends not only the local fire department to an emergency, but also equipment and manpower from other neighboring departments.

One example of this was a structure fire March 18 in Lewiston. When the 911 call was made, dispatchers paged firefighters from Smithfield and North Logan in addition to those in Lewiston.

When it appeared that would not provide enough manpower to fight the fire inside the home, a second page went out, requesting reinforcement from Newton, even Franklin, Idaho.

This problem is not unique to Cache Valley. According to the National Fire Volunteer Council, 69 percent of fire departments across the country are staffed by volunteers.

“The number of volunteer firefighters in the United States has declined by about 12 percent since 1984,” the organization reports on its website. “Four major factors contributing to the decline include increased time demands, more rigorous training requirements and the proliferation of two-income families whose members do not have time to volunteer.”

Locally, there are more than 200 volunteer firefighters in Cache Valley, but only a fraction of those are available for daytime response.

Lewiston and Richmond have both taken innovative approaches to increasing the number of firefighters available during the daytime when their counterparts are at work.

In Richmond, Wood said he will be approaching some of the local schools and businesses to see if they would be willing to allow their employees to become certified firefighters and emergency medical technicians, regardless of where they live.

Right now, there is one employee at North Cache 8-9 Center who is certified and available. It works out nicely because many of the roughly 100 calls for service per year are at that school, Wood said.

Wood also said Lewiston requires its city employees to be certified as well, which boosts the number of people available to respond during the day.

However, those solutions might not work for every municipality. A town like Mendon doesn’t have businesses to solicit from, and city employees might come and go.

Funding and other challenges

While people are the heart of any fire department, it still takes money – and lots of it – to maintain a fire department. Each of the local fire departments around the valley are funded by the city they serve. Wood said Richmond city taxpayers provide $60,000 per year for fire and emergency medical services, with a little over 20 percent of that skimmed right off the top for insurance and bonds. It costs $15,000 every time a new firefighter is trained just for his protective clothing, a helmet and air pack.

Olsen, whose budget is about $40,000 per year, said his department is looking into the purchase of a new truck for Mendon, and even a small truck with no pump could cost as much as $125,000.

“The bids that are coming in are starting to scare me to death,” he said.

Grants are available to cover some of these expenses, but the competition is fierce, with fire departments all over the country all looking for a piece of the pie.

“It is just like a job interview,” Wood said. “You have to be able to sell your department and explain why you should receive that money.”

“Still, a volunteer firefighter is entitled to the same good working conditions, protective equipment and safe and reliable apparatus. We have done so much for so little it now seems to be the norm,” he said.

Difficult as it might be, the money is there for equipment, but one place it is lacking is in medical benefits for longtime volunteers, Wellsville Fire Chief Clint Kerr said.

As he grows older and his years of service topped 25 years, Kerr said health has become a concern to him.

“There is nothing out there that takes care of us after we retire,” he said.

And with the growing number of firefighters approaching the 50 and older age bracket, it is something that weighs on him more and more.

The State of Utah only recently approved workers’ compensation coverage for paid or volunteer firefighters, but it is limited to four types of cancer known to afflict firefighters.

Kerr pointed out that firefighters give up a great deal of time with their families and they see and experience things that never leave their minds. He acknowledged the first few years were fun, but over time, it becomes simply an act of service.

“It’s all about trying to help someone else,” he said.