California’s workers’ compensation system discriminates against women by judging benefits on the basis of stereotypes and ignoring harm done to women – such as refusing permanent benefits when a woman loses a breast to cancer, according to a lawsuit filed this week.

The suit, filed on behalf of several women and a labor union, argues that women’s equal opportunity rights are violated by a system where the medical examiners are overwhelmingly male and the guide used to determine the level of disability from a work injury is gender-biased.

The state Division of Workers’ Compensation did not immediately return a request for comment.

The suit, which seeks class-action status, was filed in Los Angeles County Superior Court on behalf of several women, including two veteran police officers who had mastectomies.

Sgt. Janice Page spent 26 years with a California law enforcement agency. She developed breast cancer after years of exposure to toxins while working with ammunition, narcotics and at car and building fires, according to the lawsuit.

She submitted a workers’ compensation claim after her right breast was removed. Although a medical evaluator concluded that her breast cancer was work-related, she was found to have no permanent disability from the loss of her breast based on a rating in an American Medical Association guide used by California, according to the lawsuit. 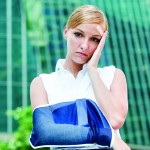 Page, who has continuing scarring, numbness and psychological issues, had to hire a lawyer to fight for benefits, according to the lawsuit. She remains on the job.

“The loss of my breast has been devastating,” Page said in a press release announcing the suit. “I carry the same weight on my duty belt as my male colleagues, confront the same dangers, work just as hard, and it is not fair for me and my female peace officers to be penalized because of our gender.”

By comparison, the AMA guide considers that a man who has his prostate removed because of work-related cancer is 16 percent to 20 percent impaired, according to the suit.

The U.S. Veterans Administration assigns mastectomies a disability rating of 30 percent to 80 percent, according to the lawsuit.

The suit said a telecommunications worker who developed crippling carpal tunnel syndrome in both hands was found eligible for a lesser permanent disability payment because a medical examiner found that a portion of her disability was due to “risk factors” of her age and sex.

A state report to an Assembly committee in May suggested that reducing permanent disability benefits on the basis of such calculations – a process known as apportionment – may affect 11,000 women a year, according to the lawsuit.

The state’s workers’ compensation scheme violates federal and state anti-discrimination laws and “perpetuates the type of overt sex discrimination that is a relic of a past era,” the suit said.

The suit wants state officials to “root out and eliminate pernicious gender-based stereotypes” in the workers’ compensation system. No damages are being sought.

“By permitting and condoning the distribution of workers’ compensation benefits on the basis of sex, the State of California sends a clear message that women’s work is worth less” than that of men, the suit contended.

The suit names the Division of Workers Compensation, California’s secretary of labor, the Department of Industrial Relations, and various boards and officials.