The city of Seattle, Wash. has paid $3.5 million to the family of a bicyclist who died two years ago in a collision with a truck in downtown Seattle.

The Seattle Times reported the payment resolves a claim that the city’s “failure to prepare an adequate traffic-control plan created dangerous conditions for bicyclists.”

Sher Kung, a 31-year-old attorney, was biking on Second Ave when she was struck by a truck making a left turn. It happened less than two weeks before the city planned to make major bicycle-safety improvements to the Second Avenue bike lane. 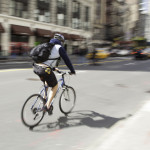 City staff and David Whedbee, a lawyer for Kung’s fiancée, said a confidentiality agreement prevented them from discussing settlement details.

A city official says a check sent June 21 represents only its share of the settlement, which includes other parties. The city would not identify the other parties.

The truck driver was not charged.