The Bulletin newspaper reported Sunday that many building projects – from single-family homes to large commercial projects – are running up to three months behind schedule, are over budget and prompting concerns of possible layoffs.

“We haven’t run into this in Bend before,” said Jay Nees, project manager with Walsh Construction Co., a commercial builder based in Portland.

Walsh Construction broke ground on a six-building apartment project over the summer. Nees said the apartments would come onto the market in phases. The first buildings are still scheduled to open in late spring. But Nees said some of the buildings that broke ground later in the process are one to two months behind schedule.

Between finding materials that work in low temperatures and keeping work sites safe and clear of snow, ice and other winter hazards, Nees estimated that the cost of winter weather on the apartment project has exceeded $100,000. 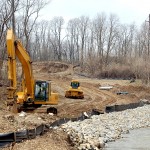 “I think everyone’s over budget at this point,” Nees said.

Brian Fratzke, principal broker at Fratzke Commercial Real Estate, said one adjustment for builders who come from warmer climates is dealing with a more limited building season. He said many local asphalt plants close for the winter, meaning driveways and parking lots can be difficult to complete between November and March.

“You don’t have a 12-month construction season; you just don’t,” Fratzke said.

Tim Knopp, executive vice president of Central Oregon Builders Association, said builders can often work on commercial and residential projects through the heart of winter, taking a day or two off as needed. This winter, however, the heavy snow and relentlessly cold temperatures have made it more of a challenge.

“It seems like every 10 to 15 years you get something like this,” Knopp said. “I guess this is our year.”

Nees added that Walsh Construction has resorted to drastic measures – including renting a 120-by-50-foot wedding tent – to keep the foundation of an apartment building warm and without snow.

“Once the ground’s frozen, you can’t do much with it,” North said.