More than 3,000 petroleum wells are being shut down in Colorado as a precaution after a house explosion killed two people, an oil and gas company said.

Anadarko Energy said it operated a well about 200 feet (60 meters) from the site of the explosion in the town of Firestone, a community of about 10,000 people 30 miles (48 kilometers) north of Denver.

In a written statement, the company did not say whether the well was believed to be a factor in the explosion, or whether it produced oil, gas or both.

The proximity of subdivisions and wells is a source of contention in Colorado, where fast-growing cities sometimes overlap with lucrative oil and gas fields. Conflicts have generated lawsuits and attempts to overhaul state rules, and the Legislature killed a proposal this year that would have increased the minimum distance between schools and new oil and gas facilities. 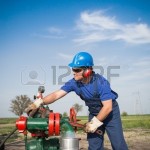 Anadarko called the explosion a tragedy and expressed sympathy for the victims and their families. The company said it is cooperating with fire investigators and state regulators.

Anadarko said it will lose the equivalent of 13,000 barrels of oil a day while the 3,000 wells are turned off. A barrel is 42 gallons (151 liters). Christiansen declined to disclose the estimated value of the product.

The wells being shut down and the one near the site of the explosion are all vertical, Anadarko said. Newer technology allows drilling rigs to bore vertically and then horizontally to reach oil or gas some distance away.

All the wells being shut down are about the same age as the one near the home, the company said.