A bus driver was killed and eight passengers injured when a tire failed and the driver lost control of the bus carrying support staff from an Illinois drum corps.

The bus drove over the median before tumbling onto its left side shortly after 4 a.m. Monday on Interstate 10 about 10 miles from the Arizona-California border, Arizona Department of Public Safety spokesman Quentin Mehr said.

The driver, 55-year-old Donna M. Howard from Kansas City, Missouri, died after being partially ejected from the vehicle, according to Mehr, who said she wasn’t wearing a seatbelt at the time of the rollover. 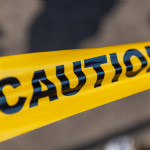 Eight of the 13 passengers were taken to hospitals in Arizona and California, including two who were airlifted to a Phoenix hospital.

All eight were treated and released from hospitals by Monday evening, Mehr said.