Gov. Jerry Brown and legislative leaders have released a plan to extend through 2030 California’s cap-and-trade program, a key piece of the state’s quest to fight climate change by drastically reducing emissions from greenhouse gases.

The deal updates how refineries, utilities and other carbon emitters can use pollution allowances and offsets, and it gives the California Air Resources Board power to set a price cap on carbon aimed at containing costs to businesses and consumers. But it also prevents local air districts from placing further carbon emissions restrictions on polluters, a move some environmental groups decry as a concession to oil companies. The deal includes a companion bill aimed at reducing local air pollution.

With a bill now in print, lawmakers could vote on the deal as early as Thursday. The cap-and-trade reauthorization needs support from two-thirds of lawmakers to pass.

Cap-and-trade puts a limit on the state’s overall greenhouse gas emissions and requires oil refineries, utilities, ports and other polluters to buy and trade allowances to emit carbon. By putting a price on carbon and reducing allowable emissions over time, it aims to incentivize polluters to reduce their emissions. Money from the program goes into a greenhouse gas reduction fund that pays for energy conservation efforts, transportation and housing projects and a high-speed rail, a pet project of Brown’s.

The program is a key piece of California’s commitment to reducing greenhouse gas emissions by 40 percent from 1990 levels by 2030.

Brown, who has been extolling California’s climate leadership on the world stage, is scrambling to cement cap and trade for another decade while satisfying competing interests at home. Environmental groups want to see more dramatic pollution reductions and business interests don’t want to see a jump in costs, to industry or consumers. 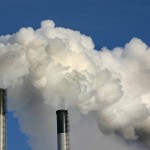 “The Legislature is taking action to curb climate change and protect vulnerable communities from industrial poisons,” Brown said in a statement announcing the deal.

Environmental justice groups have charged businesses were too involved in crafting it.

“The oil lobby has had way too much influence on this legislation,” Bill Magavern, policy director of the Coalition for Clean Air, said outside the Capitol early Monday.

Two points of contention have centered on regulating local air pollution and how the state hands out allowances and offsets, which let businesses keep emitting greenhouse gases.

The state sells off allowances through auctions, with the next slated for August. But it also hands out some allowances for free to polluting industries, with the goal of helping them remain competitive and avoid price spikes for consumers. The deal doesn’t phase out free allowances as quickly as initially planned, a move critics say removes incentives to clean up emissions. But industry groups argue it will help ensure California consumers don’t see drastically higher prices at the gas pump, in their utility bills or elsewhere. The deal will decrease those free allowances by 40 percent by 2030, Brown’s office said.

Polluters can also “offset” some of their emissions through projects to mitigate the effects of greenhouse gases, even outside of California. The deal decreases the allowable amount of offsets and encourages more building in California.

Under the plan, local air districts would be prevented from putting additional regulations on stationary sources of carbon emissions in their districts, a power several Democratic lawmakers in low-income communities near refineries and other pollution sources have fought to allow.

“Our environment and economy depend on curbing the harmful effects of climate change,” Rendon said. “Once again we are showing that in California, protecting the environment and improving public health are inextricably linked.”

Brown will need 27 votes in the Senate and 54 in the Assembly to pass the bill. Democrats hold a supermajority in both chambers, but some Assembly Democrats may not think the bill does enough to improve local air quality. Brown has said he’ll need support from Republicans to pass the bill.

Beyond the cap-and-trade provisions, the deal eliminates the fire prevention fee and makes some exemptions from the sales and use tax for power generators and distributors.