California’s top court has opened the door for consumers to sue Novartis AG and other makers of brand-name pharmaceutical products over injuries blamed on generic versions of the drugs manufactured by other companies.

The California Supreme Court’s ruling on Thursday broke with decisions nationally to the contrary and created exposure for brand-name drugmakers who could be sued in the state for failing to warn users about the risks of cheaper, generic versions of their drugs.

Leslie Brueckner, the plaintiffs’ lawyer, said the decision was the only one currently by a state’s top court to favor consumers of generic drugs, who legally cannot sue generic drugmakers for not warning about their products’ risks.

“This is just a huge victory for public health and safety, and this victory will be felt nationwide,” she said. 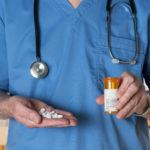 Novartis, whose appeal had the support of industry groups including the U.S. Chamber of Commerce, said it disagrees with the court’s decision to potentially hold it responsible for an injury caused by a different company’s product.

The decision came in a lawsuit centered on two twin children who were diagnosed with developmental delays and autism after their mother while pregnant took a generic version of Brethine to suppress premature labor.

Under a 2011 ruling by the U.S. Supreme Court, generic drug companies cannot be sued for failing to provide adequate label warnings about potential side effects because federal law requires them to use the brand-name versions’ labels.

The father of the children, referred to in court papers as T.H. and C.H., instead sued Novartis, which made Brethine until 2001, and aaiPharma Inc, which bought the rights to it in 2007 while their mother was taking the generic version.

Novartis argued its duty to warn consumers did not cover those taking generics and that a contrary ruling would effectively make it the market’s insurer.

The court disagreed. Justice Mariano-Florentino Cuéllar wrote that brand-name manufacturers are the only entities with the ability to strengthen a warning label.

“So a duty of care on behalf of all those who consume the brand-name drug or its bioequivalent ensures that the brandname manufacturer has sufficient incentive to prevent a known or reasonably knowable harm,” Cuéllar wrote.

The court also held 4-3 that Novartis could be sued despite divesting itself of Brethine because its failure to update the warning label before the sale could foreseeably cause the children harm.

(Reporting by Raymond in Boston; Editing by David Gregorio)