California Gov. Jerry Brown has signed legislation that seeks to beef up dam inspections following a near disaster that caused the evacuation of almost 200,000 people living downstream from the tallest one in the United States.

The measure implements several recommendations from experts who reviewed the crisis at Oroville Dam last year.

The measure, AB1270, which passed the Assembly and Senate unanimously, was written by Assemblyman James Gallagher of Yuba City, who was among the people forced to flee when both the main and emergency spillways experienced catastrophic damage. Engineers feared an eroding hillside would cause the uncontrolled release of a millions of gallons of water. The crisis was averted. 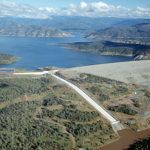 Independent experts said Department of Water Resources officials mistakenly believed for years that the spillways sat on solid bedrock, even though reports from geologists and construction crews planning and building the structure reported significant erodible soil.

The federal rankings are based on factors including the size of the dam and its degree of risk to people downstream, not the dam’s current condition.