The technology behind autonomous vehicles has originated from coders in Silicon Valley, engineers in Detroit and academic researchers in Pittsburgh. Much of it eventually lands on the streets of Arizona, a state that’s done more than any other to welcome tests of unproven self-driving software to public roads.

The death this week of a 49-year-old woman in Tempe, after she was struck by a self-driving Uber Technologies Inc. SUV, highlights the risk of the state’s laissez-faire approach to the emerging technology. Developers flocked to the desert state in response to policies that were designed to encourage testing and minimize red tape. That approach has come under scrutiny after what’s likely the first pedestrian death linked to an autonomous vehicle.

Arizona Gov. Doug Ducey issued an executive order in 2015 to allow self-driving vehicles to operate without a human backup driver behind the wheel. It was a calculated move to make the state a hub for self-driving tests. California further cracked open a window of opportunity the following year, when its Department of Motor Vehicles shut down an Uber pilot program in San Francisco, insisting that the company register its driverless cars and pay a fee. Ducey, a Republican, implored Uber to relocate.

“While California puts the brakes on innovation and change with more bureaucracy and more regulation, Arizona is paving the way for new technology and new businesses,” Ducey said in December 2016. “California may not want you, but we do.” He took his sales pitch to Twitter, too. 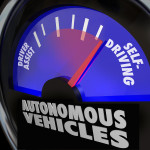 California requires companies to register all automated vehicles used on public roads. Operators must log each time human drivers take manual control from an automated system and file detailed reports of every crash, no matter how minor. The state publicly releases crash reports and letters from the companies on how many times test drivers disengaged their self-driving vehicle systems annually.

Companies may be responding to this by taking their testing elsewhere. Even Alphabet Inc.’s Waymo, which reported a tiny rate of disengagements last year, nearly halved the number of autonomous-driving testing miles racked up in its home state compared with 2016.

Arizona hasn’t required any crash or disengagement reporting, and its far more hands-off approach has caught companies’ attention. The state now has more than 600 autonomous test vehicles on its roads, according to the governor’s office. California has about 365.

“Unlike Arizona, California has taken a safety driven approach when developing autonomous vehicle regulations,” Jim Frazier, a California assemblymember, said on Monday. “Autonomous vehicles have the potential to save thousands of lives a year, but they have to be tested properly to protect the public.”

The greater Phoenix area, which includes Tempe, plays host to autonomous test programs from Uber, Intel Corp., General Motors Co. and Waymo, the startup that sprung from Google’s self-driving car project. It’s chosen the suburb of Chandler as the location for a driverless chauffering service, which is slated later this year to become the first robotaxi business available to public passengers in the U.S.

City officials in Arizona have taken their cues from Ducey’s accommodating posture. Tempe Mayor Mark Mitchell said in an interview last month that he welcomed autonomous vehicles on local streets as a way to help the city plan for changes to land use and transportation that will be wrought by the driverless future. Uber, the mayor said at the time, was “really operating very safely on our roadways.”

After Sunday’s fatal accident, Mayor Mitchell reaffirmed “the innovation and promise the technology may offer” and also vowed that “city leadership and Tempe Police will pursue any and all answers to what happened in order to ensure safety moving forward.”

There are reasons beyond minimal regulation that Arizona is luring autonomous vehicles. Year-round sunny and dry weather enables companies to avoid snowy conditions that can flummox self-driving sensors. In Chandler, a quarter of the workforce is involved in high-tech jobs. The city envisions its East Valley section—home to 10,000 Intel employees, including engineers graduating from Arizona State University’s nearby Tempe campus—becoming a key part of the national supply chain for autonomous vehicles.

“We have a lot of companies currently operating in the AV supply chain that allowed for Chandler to be a good fit for additional AV development,” Micah Miranda, the city’s economic development director, said in an interview last month. “A lot of the activity was simmering underneath the surface, and then with Waymo’s introduction into the marketplace, it opened up a lot more.”

Just a few weeks before the deadly Uber accident, Arizona expanded its permissive stance toward autonomous vehicles. On March 1, the state issued an update to Governor Ducey 2015 executive order meant to reflect “advancements in technology and testing” of autonomous vehicles. In effect, the move permitted commercial robotaxi services, taking a step further than just allowing public-road testing, according to Bryant Walker Smith, an assistant professor of law at the University of South Carolina.

“The governor is in fact trying to facilitate more rather than less,” Smith said in an email.

The Uber accident highlights the need for transparent collaboration between industry and communities, said Thad Miller, a professor at the School for the Future of Innovation in Society at Arizona State University, who has worked with Tempe’s mayor on how to plan for the advent of driverless cars. “Road safety and these other issues must be addressed as larger policy, infrastructure and political problems,” Miller said. “Then we can ask: Where do AVs fit in, and how can they help?”

For the time being, at least, Arizona won’t see any of Uber’s automated Volvos on its roads. The ride-hailing company said Monday it will pause tests of all autonomous vehicles, which had been operating in Pittsburgh, San Francisco, Toronto and the Phoenix area. Waymo hasn’t indicated whether it’ll change its commercial robotaxi plans for the area.

“Arizona has been the wild west of robot-car testing with virtually no regulations in place,” said John Simpson, the privacy and technology project director for the nonprofit advocacy group Consumer Watchdog, which has called for a national moratorium on autonomous-vehicle testing on public highways. “When there’s no sheriff in town, people get killed.”