Authorities say data recovered from the wreckage of the SUV carrying a large family from Washington state shows the deadly crash may have been intentional.

A spokesman says the data shows the vehicle was stopped at a flat pull-off area before it sped off the steep rocky face. 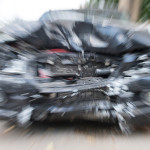 Five members of the Hart family were found dead. Three of the children are still missing.

Authorities don’t know exactly when the wreck took place. A passing motorist discovered the vehicle on March 26, three days after social service authorities in Washington state opened an investigation apparently prompted by a neighbor’s complaint that the children were being deprived of food.