A hotel official told a jury that he doesn’t know why an incident report about a British tourist’s fall while taking part in a David Copperfield illusion at a Las Vegas show did not include accounts from other people.

MGM Grand Hotel risk manager Mark Habersack testified during a civil trial that he did not begin his current position until several weeks after the fall by Gavin Cox in November 2013, and he couldn’t answer questions about how the mishap was investigated.

However, he pointed out, “In the actual report, the only attached statement is from Mr. Cox.”

Cox has yet to testify about the injuries he says he suffered when he and about 10 audience volunteers were hurried by stagehands from the stage to the back of the theater through indoor hallways and an outdoor alleyway so they could “reappear” in the theater for the show finale. 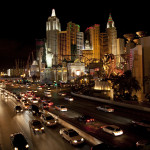 The resident of Kent, England, claims lasting brain and body injuries have led to $400,000 in medical expenses. He and his wife, Minh-Hahn Cox, are seeking monetary damages in a civil negligence claim.

Copperfield has spent a day on the witness stand and is expected to return Monday. He has denied knowing about anyone other than Cox getting hurt over the more than 15 years the vanishing trick has been performed at the MGM Grand in Las Vegas and on tour in other cities.

Copperfield added that he didn’t know about Cox’s case until he was sued in 2014 in Nevada state court.

Cox’s lawyers say they’ve heard from witnesses willing to testify about three other people who were injured in the shows over the years.