Preliminary data from the Department of Public Safety show 331 people died in crashes in 2018, the Las Vegas Review-Journal reported. They died in 301 crashes and three-quarters of them happened in Clark County. 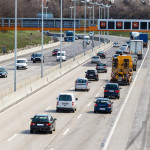 Last year’s figures compare with the 311 deaths that happened in 292 crashes statewide in 2017. August of last year saw 37 fatalities, the most in a single month in 2018.

The state data also show fatalities caused by vehicle occupants who were not wearing seatbelts increased 23 percent over the year.

“Whether folks want to or not, it’s currently a secondary law in Nevada,” Bennett said, referring to the fact that officers in the state can only cite drivers for not wearing seat belts if they are stopped for a different infraction.

He added “Making it a primary law is something we’ve been pushing for a while now. I don’t want to point specifically to Nevada not having it as a primary law, but I do believe it is a factor.”

Pedestrian deaths declined from 98 in 2017 to 80 last year, the first drop in nine years.