The policy subsidies offered by Florida’s state-run Citizens Property Insurance Corp. flow disproportionately to the wealthy and, in concert with similarly regressive subsidies from the National Flood Insurance Program, serve primarily to encourage more development in risky regions along the coast.

That’s the conclusion of new research produced by scholars at the Coase-Sandor Institute for Law and Economics who analyzed policy-level data from Citizens to quantify the extent to which its subsidies benefit those in wealthier ZIP codes who buy more coverage.

In their working paper, scholars Omri Ben-Shahar of the University of Chicago Law School and Kyle Logue of the University of Michigan Law School cite U.S. Census Bureau data showing that population in Florida’s coastal regions more than quadrupled between 1960 and 2008, growing by 10 million people. Not even massive storms like 1992’s Hurricane Andrew managed to slow this trend, as the state’s coastal property had, as of 2012, an insured value of $2.8 trillion, constituting 79 percent of the state’s total property exposure.

The authors highlight as a major contributor to this trend the below-market rates charged for flood protection by the NFIP, noting that the program’s policy count spiked from 1.9 million in 1980 to more than 5 million in recent years. What’s more, they note, numerous independent data sets establish that the NFIP disproportionately benefits wealthier Americans, starting with a 2007 Congressional Budget Office analysis that found the median range for homes insured by the NFIP was $220,000 to $400,000, compared to the then-U.S. median of $160,000. For those who receive subsidized policies (the kind that were supposed to be phased out by 2012’s Biggert-Waters Act), more than 80 percent lived in the top quintile of wealthiest counties in the country.

As we’ve covered in this space in great detail, Congress later reneged on its plan to phase out all of the NFIP’s policyholder subsidies, which generally leave beneficiaries paying one-third or less of the premiums that would be prescribed by actuaries. The rationale for preserving the subsidies – that they were needed to help lower- and middle-income Americans to afford to remain in their homes – is particularly galling in light of the available data. Logue and Ben-Shahar note that roughly 40 percent of subsidized coastal properties are worth more than $500,000 and roughly 12 percent are worth more than $1 million. Indeed, it turns out that nearly a quarter of coastal properties receiving subsidized NFIP rates aren’t even the homeowner’s primary residence.

But in important new findings, the researchers then go on to demonstrate how similar patterns prevail in the properties insured by Florida Citizens. Using policy-level data obtained from Citizens through open public records requests – a far more detailed level of data than the county-level aggregates kept by the Federal Emergency Management Agency for the NFIP – Ben-Shahar and Logue map who is getting the biggest breaks on their home insurance. The pattern, in which greater subsidies are shaded in darker green, shows that wealthier coastal regions (notably Monroe County, which makes up the Florida Keys, and where rates would need to be increased 126.5 percent to fully cover the risk) get the biggest subsidies, while inland zones often are paying more than their fair share. Red dots on the map indicate ZIP codes where the median home value is at least three standard deviations more than Florida’s statewide median. 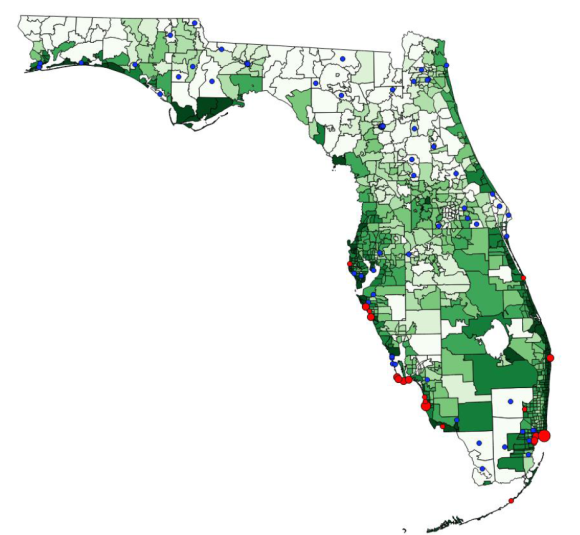 Logue and Ben-Shahar then went further still, calculating the relative value of each policy’s subsidy. As the authors explain:

To do this, we created a synthetic benchmark in which the subsidy pool (the total amount of subsidy for all policies within the dataset) is divided pro rata across the policies, under the (counterfactual) assumption that all policies receive the same indicated rate change—the same percent discount. We denoted this benchmark as a ‘unit subsidy,’ with all policies receiving exactly one unit. We then compared this unit-subsidy benchmark with the actual percent discount each policy received. This created a distribution of ‘percent subsidies,’ some receiving more than the unit benchmark, others receiving less. We measured whether this ‘percent subsidy’ distribution was correlated with household wealth.

Finally, they conclude that even these findings may, in fact, be underestimating the reality

The estimates we derived for the correlation between wealth and subsidy probably understate the true magnitude of the pro-affluent advantage. First, one of our measures of wealth—policy coverage limit—is capped by Citizens’ rules, which means that we are not measuring the true wealth of the people who buy maximal coverage, and are therefore deriving downward-biased correlations. Second, Citizens’ report of the subsidies—the indicated rate changes—understates the subsidies’ true magnitude. Citizens does not take into account some of the costs of providing insurance—costs that private insurers would incur in running an insurance scheme. Specifically, when Citizens calculates the amount of the indicated rate change, it does not build into it the cost of reinsurance—an insurance reserve necessary to protect it against the risk of pricing errors or unexpected spikes in losses.