A week and a half after a magnitude 6.2 earthquake off the coast of Oregon reminded West Coast residents of the ever-present seismic risk below their feet, The New York Times cast its gaze on California, where only about 13 percent of the state’s homeowners maintain coverage for earthquakes.

Perhaps most notable in the Times piece were the comments of California Insurance Commissioner Dave Jones, who laid out starkly and in no uncertain terms that, when the inevitable “Big One” comes for the Golden State, uninsured Californians should not expect the federal government will be there to bail them out.

Mr. Jones, the insurance commissioner, describes the low uptake of insurance as “a chronic problem of denial and underestimation of the risk.”

In the case of a large earthquake would the state or federal government come to the rescue?

Many Californians, he said, “mistakenly believe that FEMA or the state will rebuild their homes in the event of an earthquake.”

Though the 13 percent earthquake insurance penetration figure represents a problem in a state where the overwhelming majority of residents are exposed to serious seismic risk, it also represents a fairly recent improvement. In particular, the California Earthquake Authority, a pool of private property insurers that functions as a publicly managed state instrumentality, has had some modest success in improving its take-up rate, which had been experiencing a long period of decline. 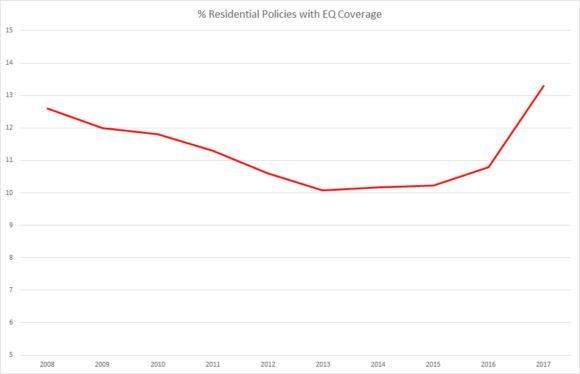 This turnaround came as the CEA endeavored to cut rates, offer a broader range of deductible options, doubled the amount of coverage available for contents, quadrupled coverage for additional living expenses and now provides mitigation discounts of up to 20 percent. Nonetheless, there are obvious limits to how far product and marketing changes alone can go to increase penetration.

Various other legislative proposals have been put forward over the years to expand earthquake insurance take-up further still. In the 112th Congress, Sens. Barbara Boxer and Dianne Feinstein, both D-Calif., sponsored legislation that would direct the U.S. Treasury Department to guarantee up to $5 billion of debt issued following an earthquake by the CEA or other eligible state earthquake insurance programs. However, analysis of that bill by R Street Senior Fellow Lars Powell found it would not drive down premiums or increase take-up of coverage to anywhere near the degrees projected by the measure’s supporters.

At heart, the primary reason most homeowners don’t carry earthquake coverage is that, unlike other insurance for floods, fires and windstorms, the government-sponsored enterprises Fannie Mae and Freddie Mac don’t require it. Later this month, my colleague Dan Semelsberger and I will publish a study examining the billions of dollars of uninsured earthquake risk currently held on Fannie and Freddie’s books, the implicit taxpayer subsidy this risk represents and ways to transfer that risk to the private market.

P/C Insurance Underwriting Profits Up 21% for Q1: AM Best Analysis