Even more impressive, according to Benjamin J. McKay, executive director of the Surplus Line Association of California, is the growth of the industry during the past four years.

McKay said the industry has seen a 27 percent increase between 2010 and 2014 and his state of California saw about a 40 percent increase in DPW during that time. “The sector has grown dramatically for the past four years and that has driven the influx of new capital and all of the positives and negatives that come along with that,” he said.

The continued growth of surplus lines insurers doesn’t appear to be hurting their stability either.

A.M. Best reports that for the 11th year in a row, the surplus lines industry reported no financially impaired companies. That’s in contrast to the admitted property/casualty industry’s 12 known financial impairments in 2014, the rating agency said.

The combined ratio average for surplus lines specialists held strong at 91.4 for 2014 compared to 97.2 for total P/C industry in 2014, A.M. Best reported.

In general, the market position of surplus lines insurers continues to be described in favorable terms such as profitable, stable, well-capitalized and consistent performers, and A.M. Best’s outlook on the surplus lines insurance market remains stable.

The year 2014 continued the pattern of growth and favorable results, according to Henry Witmer, assistant vice president at A.M. Best Co. “2014 was a continuation of 2013 results after a couple of more difficult years,” Witmer told Insurance Journal. “In 2012 we had Superstorm Sandy and other issues, but 2014 looks good and in line with 2013.”

According to the report, results were driven by a combination of product diversification, underwriting discipline and advantageous market conditions.

It all adds up to an enviable streak: “As a result, surplus lines companies continue to outperform the overall property/casualty industry and recorded a second straight year of underwriting profitability following three years of underwriting losses,” A.M. Best says.

A.M. Best also noted that over the 21-year history of the report, the surplus lines market has more than doubled from 3.3 percent of total property/casualty direct premiums written in 1994 to approximately 7.1 percent by the end of 2014. When looking at just commercial lines DPW, the growth as a percentage has jumped from 6.1 percent in 1994 to 13.9 percent in 2014.

“The A.M. best study presents some very positive news about the state of the market, A.M. Best’s outlook on the industry and the growth in 2013 and 2014 in terms of direct written premium,” said Brady Kelley, executive director of the National Association of Surplus Lines Offices (NAPSLO). “Surplus lines premium reached its all-time high in 2014 and that’s pretty noteworthy. The market hasn’t been that high since 2006 and all signs indicate that it’s continuing to grow. That’s a positive trend.”

Surplus lines premiums are up despite rates holding relatively steady.

“Overall it’s a fairly competitive market,” said A.M. Best’s Witmer. “If there are any rate increases it would be fairly small or minimal to address inflationary trends. No dramatic changes up or down,” he said.

“A lot of the growth is driven by exposures as opposed to rate,” Brady said. “Casualty is flat at best. Property is pretty soft right now especially in catastrophe and DIC (difference-in-condition) areas. There hasn’t been a major catastrophe in a number of years and there’s a lot of capital out there.”

Standard E&S business is flat while on the general liability side rates are flat at best, maybe down, Brady said. Plus many standard market insurers are coming into traditional E&S lines to “play,” he added. “Premiums are stable or up some, but it’s not due to rate.”

In Texas – the third largest state in surplus lines premium – pricing support has helped spur growth, according to Gil Hine, incoming president of NAPSLO and president of McClelland and Hine Inc., a managing general agent and E&S broker based in San Antonio.

“We have seen support for pricing from underwriters and we haven’t seen a lot of discounting going on in our area of the industry,” Hines said. “The industry mirrors to some extent the economy overall and I think the positive economy and the things we are seeing there reflect what we are seeing in the market.”

“Perhaps coverages that no one had dreamed of before are now being developed with all this additional capital,” he said, citing several new industries that are getting attention from surplus lines underwriters.

“I’m thinking of all the transportation network companies like Uber and Lyft. These companies up until last year weren’t insured. That’s a brand new product,” he said. “We are seeing new products being developed for e-cigarettes, marijuana and drones – all of these new and innovative products are being insured in the surplus lines market.”

McKay said increases in commercial lending and asset values have also helped drive growth in the surplus lines market. But he thinks two of the most interesting drivers of growth are from catastrophe risk lessons learned and government regulation.

“In the wake of Superstorm Sandy the industry gained a better understanding of natural catastrophe risks, which I think actually started to develop with Katrina,” McKay said. “As we began to understand these risks better, we saw the admitted market being a lot more careful in how they wrote that type of business – that’s leaving a significant portion for surplus lines.”

Then there are regulatory actions that have helped drive growth.

One example has been cyber liability.

“Cyber coverage is the fastest growing surplus lines business in history and it was caused by a regulation, not by some other market factor,” McKay said. “It’s a $1 billion line right now.”

“I don’t know if it’s the fastest growing or the best thing since sliced bread but we’re seeing a lot of interest,” Sargent said. That interest doesn’t always translate to sales. “It’s still hard to get people to bind but it’s a fascinating and difficult area to insure … underwriters are still figuring this (market) out. The policies vary a fair amount and exposures vary between insureds.”

In McKay’s view, regulations can, and do, create surplus lines markets, but so far nothing has come close to what’s developed into the cyber insurance market. “For example – transportation network companies – that’s an emerging market, partially the result of a regulation but mostly the result of innovation, but it doesn’t approach the size and velocity of cyber.”

Another driver of growth: an increase in merger and acquisition activity led to a 15 percent jump in demand for transaction risk insurance during the first six months of 2015, according to Marsh’s latest Global Insurance Market Quarterly Briefing.

Sargent says increased specialization and customization can also be credited with encouraging growth in surplus lines.

“The surplus lines market provides a great outlet when there is a more complex exposure or coverage requirement,” he said. That could be solving a coverage gap as simple as a physician offering consulting services that aren’t covered under a standard medical malpractice policy. Or the doctor could be providing independent medical reviews, or doing side work in a medi-spa, both of which are often in surplus lines. 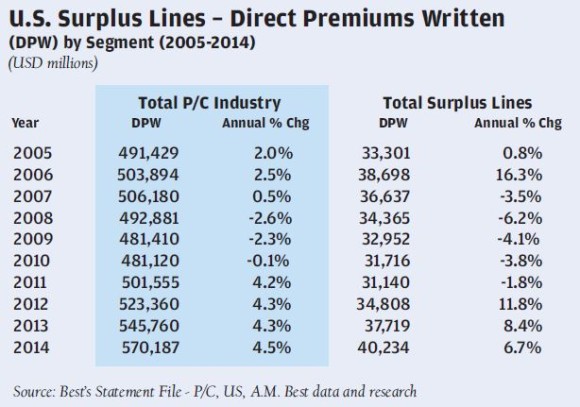 “We just had an outsourcing service operation that was providing the professional service and the technology platform. We’ve seen that in financial services, compliance, and on the medical side,” Sargent said. “This is the kind of thing where the surplus lines business can be very innovative in trying to put coverage together for these multiple exposures.”

“What drives the value of wholesalers is expertise,” Sargent said. “We can go to underwriters and customize coverage for clients,” he said. 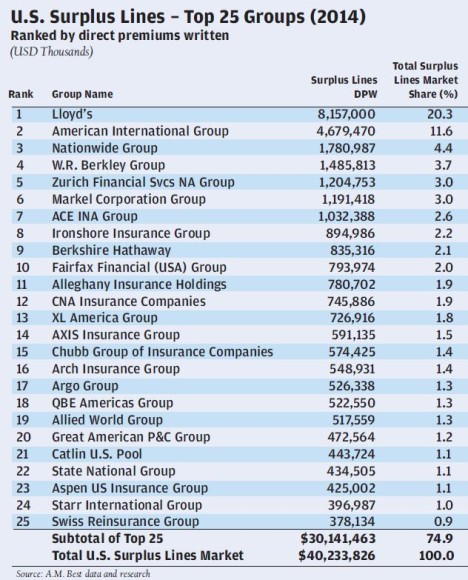