Similar to prior quarters, private equity (PE)-backed firms are doing more deals on a pro rata basis than other categories of buyers (independent agencies and brokerages, insurance and other, public brokers, and banks and thrifts). YTD June 2016, PE-backed firms completed nearly 50 percent of the announced transactions, compared to 43 percent for the same period in 2015, and 35 percent in 2014.

Comparing the first two quarters of 2016 to the same period in 2014 and 2015, public brokers’ share of the deal flow decreased, as did that of independent agencies and brokerages. Banks and the “other” category (private equity firms, underwriters, financial technology firms, specialty lenders and other unclassified buyers) had a relatively consistent pro rata share of deals in 2014, 2015 and 2016 (all YTD through June). YTD June 2016, PE-backed buyers announced 98 deals, compared to 102 for the same period last year, and all other categories of buyers announced 104 deals, compared to 136 last year (Jan. 1 – June 30).

AssuredPartners completed 14 deals with property/casualty (P/C) and multiline agencies (no employee benefit [EB] only agencies). The majority were retail agencies, and a few were specialty distributors. Roughly one-third of the deals were in the Northeast, one-third in the Southeast and the other one-third in the Midwest and West.

Broadstreet Partners closed 13 transactions with primarily retail P/C firms. About two-thirds were in the Midwest.

Hub closed 13 deals YTD, and all were retail agencies. Approximately half of the agencies were multiline agencies (P/C and EB), a quarter were P/C only and a quarter were EB only. The geography of the acquisitions was dispersed across the U.S., and there was one transaction in Puerto Rico.

Public brokers closed 22 transactions during the YTD period, with Arthur J. Gallagher & Co. (AJG) the most active (with 16 deals closed). During the six months, AJG primarily closed retail transactions (75 percent retail compared to 25 percent wholesale brokers and program administrators). More than half of AJG’s deals were multiline agencies, with EB only and P/C only each comprising 25 percent of AJG’s closed transactions.

Brown & Brown Insurance and Marsh & McLennan Companies Inc. each had three transactions that closed in the first two quarters of 2016.

In total for the first two quarters of 2016, 44 percent of the announced deals were P/C-only firms, 44 percent were multi-line agencies and 12 percent were EB and consulting firms. Hub and AJG closed the highest

number of EB firm deals during the first two quarters.

While the number of closed transactions is down slightly from 2015, deal activity continues at a robust pace across the country, and many buyers are reporting strong pipelines of transactions they expect to close this year. 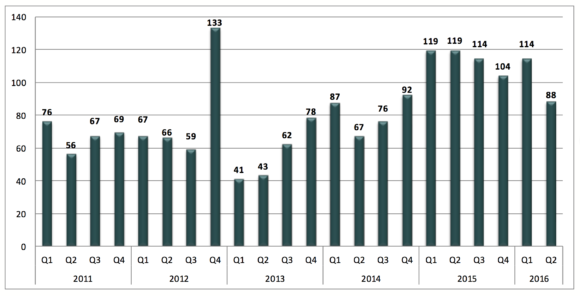