The federal flood insurance program is on a course to continue falling deeper in debt, even when there is no catastrophic storm like Katrina or Harvey.

The National Flood Insurance Program (NFIP) is currently on a path that will lead to a shortfall of $1.4 billion because its method for setting premiums has underestimated how much its claims will cost by about $1.1 billion and also because legislated surcharges are about $300 million shy of what’s needed to cover premium discounts given to certain properties, according to the Congressional Budget Office (CBO) report, National Flood Insurance Program Financial Soundness and Affordability.

Also, according to part of the analysis that could draw political interest along geographic lines, under the NFIP’s current structure, policyholders living in inland counties are subsidizing policyholders in coastal counties, particularly in southeastern and Gulf Coast states.

The CBO report was written before Hurricanes Harvey and Irma hit Texas, Louisiana and Florida. It was issued as Congress is returning to Washington to consider reauthorization of the flood program along with billions in disaster aid for victims of Hurricane Harvey.

The agency estimates that the shortfall for the NFIP program as a whole stems largely from premiums falling short of expected costs in coastal counties, rather than in inland counties.

For this report, CBO analyzed roughly 5 million policies in effect on August 31, 2016, which it said approximate the policies currently in place. CBO’s estimate of expected claims accounts for low-probability, high-cost events, such as Hurricanes Harvey and Irma. As a result, CBO says its estimate is “probably greater than actual costs would be in a typical year, although lower than costs could be in the aftermath of a catastrophic storm.”

CBO estimates that the NFIP faces $5.7 billion a year in costs while bringing in only about $4.3 billion in revenues. NFIP collects about $3.3 in premiums and about $1 billion in surcharges and fees per year.

Using commercially available computer predictive models, CBO estimates expected actual claims costs to be about $3.7 billion per year, which is $1.1 billion more than the program’s administrator, the Federal Emergency Management Agency (FEMA), uses in its method of analyzing historical data. 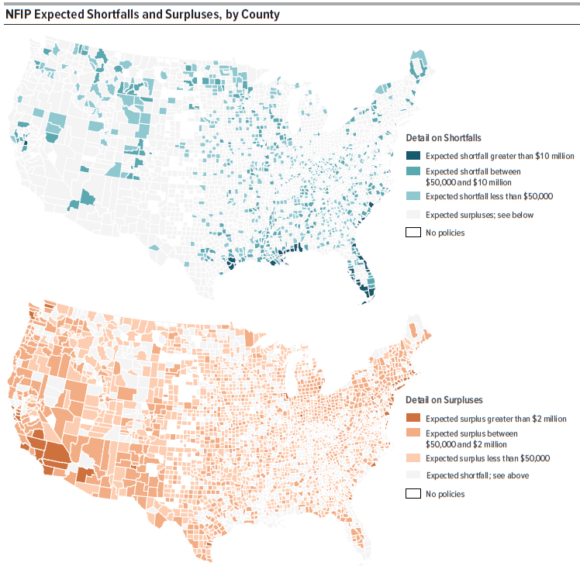 On top of the claims cost discrepancy, CBO said the rest of the NFIP’s $1.4 billion shortfall is due to a $300 million gap between discounted rates for certain policies and the money from surcharges created to help cover the costs of those discounts. The discounts are mainly for properties built before the development of flood insurance rate maps (FIRMs) and are meant to prevent hardship on homeowners that might cause some to not buy coverage.

CBO examined the contributions of coastal and inland counties to the $1.4 billion difference between NFIP’s total expected costs and premiums and concluded that the overall NFIP shortfall is largely caused by underpricing in coastal counties, which account for three-quarters of all NFIP policies nationwide.

CBO says the difference between coastal and inland counties is influenced by two factors: subsidies built into the NFIP and FEMA’s rate-setting system, both of which favor coastal policyholders.

The fact that premiums on policies for most homes in coastal areas do not cover the expected cost of wave damage from storm surges is important. Storm surge, the report notes, is a significant contributor to flood losses. Over the past 35 years, hurricane-related storm surges have been responsible for 37 percent of claims, followed by inland flooding primarily from rivers, lakes and ponds at 36 percent. Hurricane-related rain (16 percent), tropical storms (5 percent), and nor’easter coastal storms that typically affect the northeastern and mid-Atlantic states (2 percent).

CBO also found that out of 823 counties with a total of $2 billion in shortfall, 33 of them showed a shortfall of more than $10 million, or nearly 90 percent of the $2 billion total. These 33 counties, which are located mostly along the southeast coast and the Gulf of Mexico, had both large numbers of policies (41 percent of all NFIP policies) and high average shortfalls per policy ($840, compared with $220 for the 790 counties with smaller shortfalls).

The current authorization for the NFIP expires on Dec. 8. If Congress does not reauthorize it by that date, it will still be able to pay claims from funds on hand, but it will not be able to borrow additional funds, renew policies or issue new ones.

Congressional lawmakers are not in agreement on what to do about the NFIP. Some have said Harvey is a reason to press for program reforms now while others have called for a straight reauthorization, leaving reforms for another day.

CBO estimates that the NFIP faces $5.7 billion a year in costs while bringing in about $4.3 billion in revenues. NFIP collects about $3.3 in premiums and about $1 billion in surcharges and fees a year.

Under current law, FEMA can borrow up to $30.4 billion from the Treasury to operate NFIP. The agency owes the Treasury $24.6 billion, leaving $5.8 billion in remaining borrowing authority. The program was forced to borrow heavily to pay claims for Hurricanes Katrina, Rita, Wilma and Sandy. It also borrowed $1.6 billion in January 2017.

Lawmakers also have President Trump’s request for close to $8 billion in aid for Harvey victims.

The CBO report closes with a discussion of a dozen approaches that lawmakers could consider to “make the program more solvent, align premiums with risks, or keep rates low.” They include: