The National Insurance Guaranty Fund program, operating in every state, is the “untold story” in the property casualty industry, one insurance trade executive says.

“The thing to remember about the guaranty fund system that’s important is that, nationwide, it has met all of its obligations since it came into existence — $17 billion in claims have been paid on 200 insolvencies since 1969,” said Roger Schmelzer, new president of the Indianapolis-based National Conference of Insurance Guaranty Funds (NCIGF) in an interview with Insurance Journal. “Think about it, what other industry funds a ‘bail-out’ program for its customers?”

Despite the quip, Schmelzer takes seriously his new role as president of the NCIGF which he assumed in June 2006. As the leader of a non-lobbying organization, he walked in the door with a wide range of experience including time in the Indiana statehouse and Washington D.C. where he was an aide to U.S. Sen. Richard G. Lugar. His last seven years were spent at another Indiana-based property casualty trade association, the National Association of Mutual Insurance Companies where he was the organization’s public policy leader. 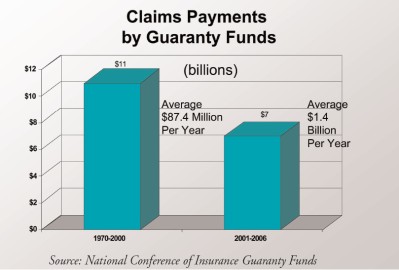 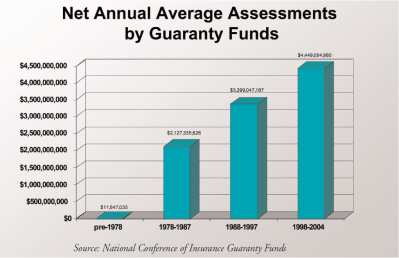 On a mission
Schmelzer has a clear mission as the new president which he says must involve laws being modernized to ensure that the main purpose of the guaranty fund is paying claims for the average homeowner or auto policy impacted by insolvency.

“Guaranty funds were never designed to be a safety net for some of the recent round of insolvencies involving large commercial insurers and high net-worth policyholders, but the guaranty funds have been relied on to back-stop these kinds of insolvencies, creating a real drain on resources,” Schmelzer said.

In recent years large commercial insolvencies such as Reliance, Fremont and Legion have grabbed all the headlines and a lot of the funds.

During the fist 30 years of the guaranty fund system, the nature of the insolvencies did not place a major stress on the system. However, since 2001 there have be a few very significant insolvencies involving insurers writing large amounts of commercial insurance and those have accounted for over half of the $17 billion total, Schmelzer explained.

“We already know public policy changes are needed to ensure that NCIGF and guaranty associations can get back to their original mission. Developing additional answers for the guaranty fund system itself requires sound strategic planning, which our organization will be working on in the coming months,” Schmelzer added.

The National Association of Insurance Commissioners (NAIC) is working on a revision of the Property Casualty Model Guaranty Association Act. Some regulators are questioning the limits paid out that NCIGF believes are essential to preserve capacity for the average insurance consumer. Schmelzer said that as a non-lobbying organization his association wants the word to be spread that modernizing guaranty funds is important and should be done soon — while there is a relatively quiet period.

State guaranty funds were created by statute in 1969, and are non-profit systems operating in all 50 states, Washington, D.C., Puerto Rico and the Virgin Islands.

“Prior to 1969 there were states that did try to fill the gap in those rare occasions when you had company insolvencies. There were about 60 private, personal, auto insolvencies in the mid-1960s, and then Congress got interested in it, and said, ‘well maybe we should start a federal guaranty fund,'” Schmelzer said. “The Federal government spurred the National Association of Insurance Commissioners to create a model and then all the states passed it.”

NCIGF though, wasn’t created until 1990. The guaranty fund system existed with informal coordination before 1990, and then folks decided that they needed to have more formal coordination, and that’s what gave birth to his organization, Schmelzer said.

Each state guaranty fund is structured uniquely with boards and assessments (See chart, Net Annual Average Assessment) of companies writing business in the state, usually at around 2 percent. But that percentage can be raised or lowered depending on the size of the safety net needed in that state. Monies from insolvent estates are also used to pay policyholder claims. Lines covered are workers’ compensation, auto and homeowners. The limits of coverage vary by state and lines of business. New York has $1 million limit, but most state adhere to a $300,000 payment limit. (See chart, Claims Payment Limits). 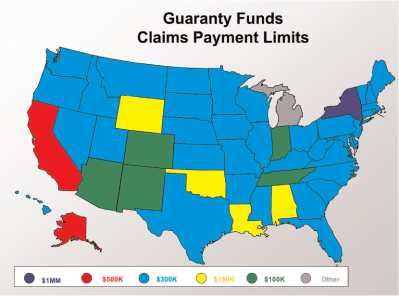 What happens in liquidation?
Exactly what is the process if a company is placed in liquidation? According to Schmelzer if a company is placed into liquidation, the insurance commissioner from the domicile state is appointed as the receiver and begins the process of collecting assets and determining the company’s outstanding liabilities. This can be a long-drawn-out process and in most cases once the receiver determines how much money is ultimately available for distribution, there usually is not enough money to pay claims in full and creditors receive only partial payment on their claims.

Guaranty funds ease the burden on policyholders and claimants of the insolvent company by stepping in and assuming the responsibility for most policy claims immediately following the liquidation. By virtue of their unique role, guaranty funds are able to provide two important benefits: prompt payment of covered claims and payment of the full value of covered claims up to the guaranty fund’s cap. By statute, guaranty funds are limited in the amount they can pay to the amount of coverage provided by the policy or the legal limit (commonly $300,000), whichever is less, Schmelzer said.

The NAIC wants to give more discretion to the receiver or commissioner to determine what claims are paid by guaranty associations, which is opposed by NCIGF on behalf of its members. State law clearly binds the receiver to the associations’ claim determination, Schmelzer said.

Schmelzer says that with this hefty responsibility of paying claims also comes the realization that the guaranty fund system operates as a business.

Education key
Another part of the mission at NCIGF, Schmelzer believes, is to make education a top priority. He says most people “kind of know” what a guaranty fund is but don’t have a real understanding of how one works.

“And it’s important for people to understand how the guaranty fund system actually works because it’s very significant public policy, with respect to what happens when there is an insolvency. The industry itself helped create the guaranty fund system in association with state legislators. So it’s really a public/private enterprise that is intended to ensure the credibility of the property/casualty industries,” he said. “Guaranty funds definitely impact the insurance marketplace.”

Schmelzer contends that this system every day is involved in the lives of individual policyholders, on behalf of the insurance industry as a matter of state law. “So that’s really very significant, and we just want to make sure that people understand that,” he said.

Federal oversight
With discussions about an optional federal charter brewing in Washington, D.C., and/or if any other form of federal regulation begins to evolve, it’s critical for policy makers to understand how this guaranty fund system works and why it is important to keep it in place, the NCIGF president said. Schmelzer is hopeful state guaranty funds will survive no matter what.

“Our objective is to preserve the state-based guaranty fund system, and that’s not an objective that’s based on preservation for preservation’s sake. It is because it is a system that works. It’s successful, it does help people, it does everything any government entity — whether state or federal — would want to have happen on behalf of policyholders.”

Schmelzer believes that even if a federal oversight program becomes a reality in the future, the state guaranty fund system should be kept intact and permitted to continue to do the job it was designed to do.