The report says positive rate momentum has been evident – as approved rate changes in homeowners lines have averaged a 7.7 percent increase across the United States in the past 18 months. The report also points to advancements in ratemaking methodology associated with capturing the cost of catastrophe risk. Recovering the cost of capital required to support retained catastrophe risk has seen widespread acceptance by state regulators and by-peril rating is becoming more widespread, according to the report.

Although rate adequacy still remains elusive in the gulf and Southeastern states, positive rate and underwriting actions have put the outlook of rate adequacy within reach for states outside these regions, according to Aon Benfield.

Furthermore, the study says that in an industry desperate for growth as auto premium volumes have stagnated, homeowners continues to be a growth opportunity for personal lines carriers. The study shows strong growth in the homeowners line between 2009 and 2012, with direct written premiums increasing 15 percent countrywide. Only Nevada saw a decline in premium volumes, as written premiums decreased by 1.5 percent during the period. At the same time, personal auto direct written premium growth was only 6.5 percent.

The study says to maximize the growth opportunities available from the homeowners line of business, more granular pricing of catastrophe costs beyond state level indications is a necessity.

It also says accurate segmentation of reinsurance and capital costs at the territory level and refining territory definitions more granularly to better match rates to cost variations is essential to achieving overall rate adequacy without jeopardizing an insurer’s ability to grow in areas that will diversify its catastrophe risk.

“Overall, the homeowners line of business is still not producing adequate returns for the industry, but given the recent rate and underwriting actions, for the first time we are seeing an improving outlook for many states, especially in non-coastal regions,” says Parr Schoolman, Aon Benfield’s global risk and capital strategy team leader.

“Although more can still be done in terms of pricing segmentation, capturing the cost of catastrophe risk in rate filings is becoming a more widespread practice within the industry,” Schoolman says. 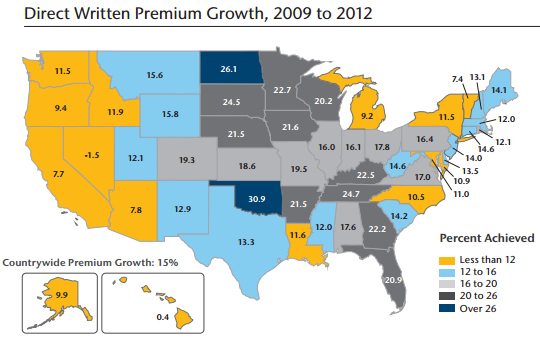 Industry premium change from 2009 to 2012 shows strong growth for the homeowners line. The Aon report says that when compared to auto growth over the same period, the picture is clear: growth opportunities in personal lines start with getting homeright. Flat home values in 2009- 2012 indicate much of the premium growth is from rate activity. Chart: Aon Benfield. 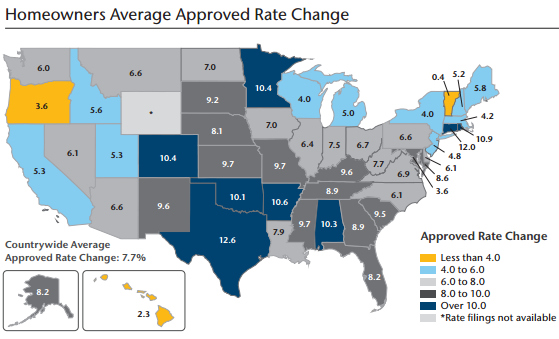 The map shows average rate changes approved for top 20 homeowners insurance groups in each state between Jan. 1, 2012 and July 1, 2013. Gulf states, where rate is most needed, show approved rate increases above the countrywide average of 7.7 percent. More activity is still needed in these states to achieve ROE targets. Chart: Aon Benfield.