More than 6,000 drivers have been caught not wearing seat belts since the law was enacted May 12, according to Utah Highway Patrol data. Of those, nearly 900 have received full citations. Full citations are tickets written for drivers who already receieved a first-time warning.

“There are a lot of people out there who say, ‘I don’t care what the law says, I’m not going to buckle up,'” said Rep. Lee Perry, R-Perry, who is also a Highway Patrol lieutenant and penned the initial legislation. 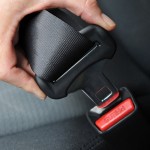 Under the new law, an offender who already got a warning can be fined $45. But the fine can be waived upon completion of a 30-minute safety course online. Failure to wear a seat belt was already a primary offense for drivers and passengers 18 and younger.

So far, the Utah Highway Patrol has made about 6,178 stops because of a lack of seat belt use, the Salt Lake Tribune reported. That is a 57 percent jump compared with the same time period last year, when patrol officers conducted 3,928 stops.