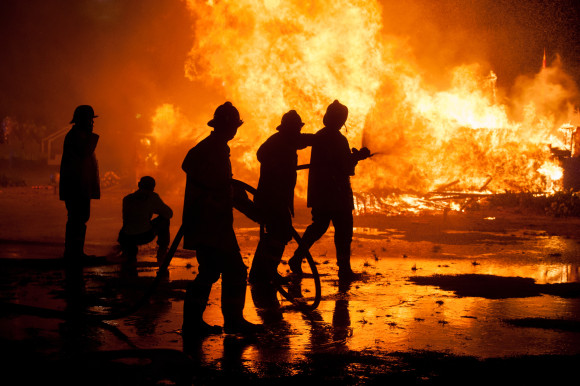 As social media buzzed about church fires in the South, investigators said July 2 that weather caused a destructive blaze at a predominantly black church in South Carolina.

The State Law Enforcement Division said in a statement that investigators found no evidence of criminal intent in the fire at Mount Zion African Methodist Episcopal Church in Greeleyville, about 50 miles north of the “Mother Emanuel” church in Charleston where nine people were killed June 17.

The pastor at the rural black church targeted by the Ku Klux Klan 20 years ago had said he suspected lightning was to blame.

SLED says its conclusion was based on an examination of the scene, analysis of debris, witness statements and a lightning strike report.

“All of the factors led us to the conclusion that the cause of this fire was natural,” SLED spokesman Thom Berry said.

While investigators look into other fires, a question is spreading online: (hash)WhoIsBurningBlackChurches?

The answers could likely be no different than what causes other buildings to burn, according to analysts studying the incidents reported by fire departments nationwide.

More than half of fires at houses of worship from 2007 to 2011 were blamed on cooking equipment and heating and electrical systems, according to estimates by the National Fire Protection Association. The association based its estimate on data collected by the U.S. Fire Administration and supplemented with survey results. An estimated 16 percent were intentionally set, and some fraction of those were later deemed hate crimes. Those figures on fires at religious structures include a small number of funeral homes.

“Perception matters,” said Marty Ahrens, an analyst for the fire protection association. “We don’t know all the causes of all the fires that have gone on this week. But if the church arsons had not happened so soon after the tragedy in Charleston, that horrible incident, would it have gotten the same level of attention?”

Although church fires have declined significantly in recent decades, they are not infrequent: Blazes at houses of worship happened, on average, 31 times a week across the nation, according to the data collected during the five-year period ending in 2011. If those trends still hold today, an average of five church fires could be intentionally set each week.

No one keeps a comprehensive, up-to-date tally of church fires in the United States, so it’s possible to undercount the incidents.

By comparison, since the shootings in Charleston, authorities have investigated roughly a half-dozen fires at predominantly black churches in the Southeast, only three of which appear to be arson. So far, no evidence of hate crimes has publicly surfaced.

Investigators have found no potential links among the fires across five states, Justice Department spokeswoman Melanie Newman said in a statement July 2.

It’s difficult to determine whether historically black churches burn more frequently than other churches. The best available government data doesn’t distinguish churches by the predominant race of their congregations.

White supremacists in the South have burned black churches over the years as a political terrorism tactic. But some attacks on black congregations defy simple racial motives. For example, the task force formed by President Bill Clinton found that 37 percent of the people arrested for bombing or burning black churches in the 1990s were black themselves.

The same task force reported that many arsonists appeared to have non-racial motives, such as covering up other crimes, pyromania and other mental illness.

Churches may face special fire risks. For example, insurers have cautioned that church spires may attract lightning strikes, and churches may pose an easy target for arsonists, since many are vacant outside of weekly worship services.

Still, the estimated number of intentionally set fires at houses of worship and funeral homes has trended downward, falling 71 percent from 1,320 in 1980 to 380 in 1998, according to an NFPA analysis. That coincides with a general decrease in all fires at those structures.

The Rev. John Taylor, who is in his ninth year as the pastor of Mount Zion, said he immediately recalled the blaze two decades ago when he learned his rebuilt church was on fire again.

“Of course we thought about it. We wouldn’t be human if we didn’t,” he said as he stood outside the building’s charred shell. But as to the cause of the most recent fire, he said, “I really thought it probably was a lightning strike.”

Greeleyville Mayor Jesse Parker was encouraging patience as investigators do their work.

“We’ll just let them do their jobs and let them bring us the results of how it got started and we will accept the findings,” he said.