Mental distractions can persist for as long as 27 seconds after dialing, changing music or sending a text using voice commands, according to new research on distracted driving.

Drivers using phones and vehicle information systems while driving may miss stop signs, pedestrians and other vehicles while their minds are readjusting to the task of driving, according to the AAA Foundation for Traffic Safety, which says its research raises “new and unexpected concerns” regarding mental distractions.

“The lasting effects of mental distraction pose a hidden and pervasive danger that would likely come as a surprise to most drivers,” said Peter Kissinger, president and CEO of the safety group. 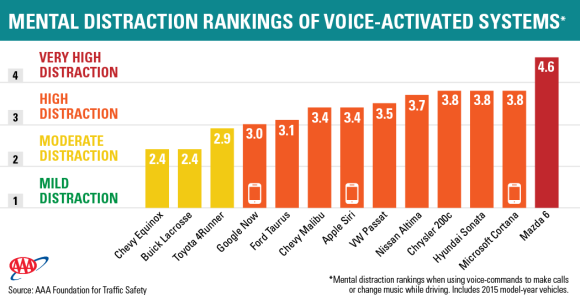 Researchers found that potentially unsafe levels of cognitive distraction can last for as long as 27 seconds after completing a distracting task in the worst-performing systems studied. At the 25 m.p.h. speed limit in the study, drivers traveled the length of nearly three football fields during this time. When using the least distracting systems, drivers remained impaired for more than 15 seconds after completing a task.

The research indicates that the use of voice-activated systems can be a distraction even at seemingly safe moments when there is a lull in traffic or the car is stopped at an intersection.

This latest research is in line with previous AAA Foundation reports on theÊdangers of verbal texting while drivingÊand with calls by the National Transportation Safety Board toÊban all phone conversationsÊbehind the wheel, even with hands-free devices.

A study conducted by the Virginia Tech Transportation Institute and the National Institutes of Child Health and Human Development in the New England Journal of Medicine found that teen drivers may be more at riskÊfor distracted driving than experienced drivers.

AAA Foundation researchers say that a category 1 mental distraction is about the same as listening to the radio or an audio book. A category 2 distraction is about the same as talking on the phone, while category 3 is equivalent to sending voice-activated texts on a perfect, error-free system. Category 4 is similar to updating social media while driving, while category 5 corresponds to a highly-challenging, scientific test designed to overload a driver’s attention.

“Developers should aim to reduce mental distractions by designing systems that are no more demanding than listening to the radio or an audiobook,” said Marshall Doney, president and CEO of the auto services organization for AAA. “Given that the impairing effects of distraction may last much longer than people realize, AAA advises consumers to use caution when interacting with these technologies while behind the wheel.”

Dr. David Strayer and Dr. Joel Cooper of the University of Utah conducted the research. A total of 257 drivers ages 21-70 participated in the study of 2015 model-year vehicles, while 65 additional drivers ages 21-68 tested the three phone systems.