In the aggregate, workers’ compensation insurers reported a modest increase in direct written premiums in the U.S. for the first six months of 2019 versus the same period 2018, up 2.2%. However, the 25 carriers with the largest dollar increase in their workers’ comp books of business grew their aggregate worker’s comp premium volume by 26.5%. This meant that the workers’ comp premium written by all others declined 0.7%. Aggregate dollar growth of workers’ comp from June 30, 2018, to June 30, 2019, was nearly $623,000,000.

Based upon our review of second quarter 2019 data, as reported by insurers reporting to the National Association of Insurance Commissioners, workers’ comp direct written premiums have increased for nine consecutive years.

With the top 25 workers’ comp insurers reporting a higher growth rate in direct written premium than all other insurers, and the insurers comprising the Top 25 being larger and better known national brands, one might assume that they are executing rigorously vetted business models, and by doing so, taking profitable worker’s comp business from the rest of the industry. With the number of workers in the country at record highs, perhaps the Top 25 writers of workers’ comp are onto something that the rest of us are missing.

Although experts will often attribute state by state differences in premium changes for workers’ comp or the corresponding loss and loss adjustment expense ratio to payroll levels, level of employment, rate of unemployment, revisions in loss cost levels or benefit levels, or other quantitative phenomenon, permit me to ask readers, including worker’s comp underwriters at the Top 25, one question: “What do Alabama, Idaho, Kansas, Mississippi, Nebraska, North Carolina, South Carolina, South Dakota, Tennessee, Wisconsin and Wyoming, 11 states located in widely different geographical areas of the country, have in common with one another?” 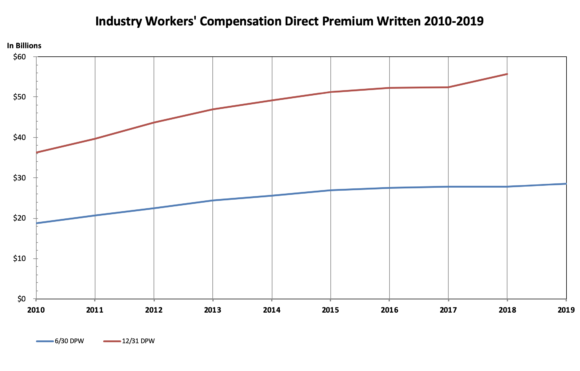 According to DISA Global Solutions, www.disa.com, these 11 states are the last in the Union where marijuana is fully illegal. However, in the other

39 states and the District of Columbia, the impact of growing, producing or harvesting marijuana (or prescribing or dispensing, etc.) may not necessitate a unique classification nor should those efforts be impacting existing classification codes. However, in the other 39 states and the District of Columbia, injured workers can, likely are, or would like to be, prescribed medical marijuana.

Why would injured workers prefer medical marijuana? The Centre for Disease Control and Prevention (CDC) has published reports indicating that the sales related to opioid prescriptions have quadrupled since 1999.

Concurrently, the CDC estimates that the number of deaths from opioids has similarly quadrupled since 1999. Workers read these same statistics and, with medical marijuana available in the overwhelming majority of states, might these workers request medical marijuana rather than opioids?

If they do make such requests, or if their medical professionals prescribe medical marijuana, have the worker’s comp statutes kept up with the laws, customs and practices, etc., of those who process and respond to workers’ comp claims?

In the face of these rulings by the courts, and other cases that are in various stages of litigation, the applicable state laws may or may not permit the reimbursement of expenses associated with medical marijuana. In fact, some state laws bar such reimbursement. All writers of workers’ comp will need an answer to this dilemma.

The 25 carriers with the largest dollar amount of growth in workers’ comp through June 30, 2019, might be envied by those insurers whose dollar volume declined; however, the emergence of medical marijuana in 39 states and the District of Columbia concurrent with the national scrutiny of opioids may be the phenomenon to evaluate and understand. 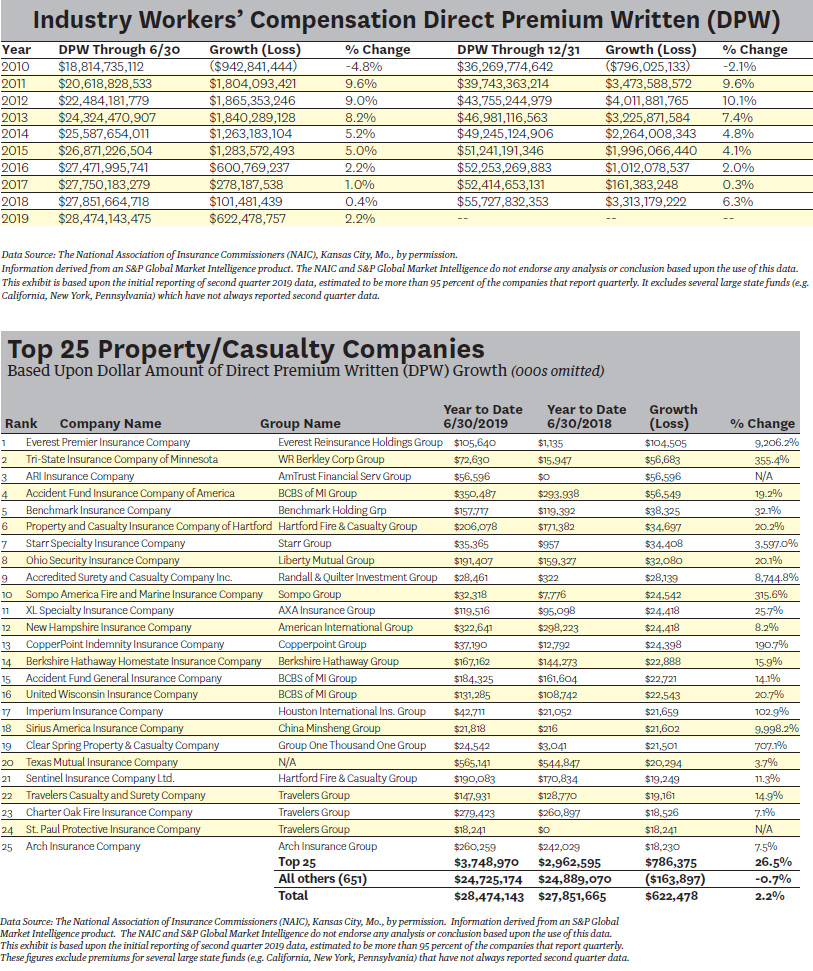