The number of cars on US roads is returning to normal as states ease COVID-19 restrictions, but that doesn’t necessarily mean claims frequency and severity will return to historic patterns.

Metromile, a San Francisco-based pay-as-you-go auto insurer, expects a permanent change in driving patterns even after pandemic restrictions are gone.

“We think that there is going to be a very large group of Americans who are going to permanently drive less,” said Communications Director Rick Chen. 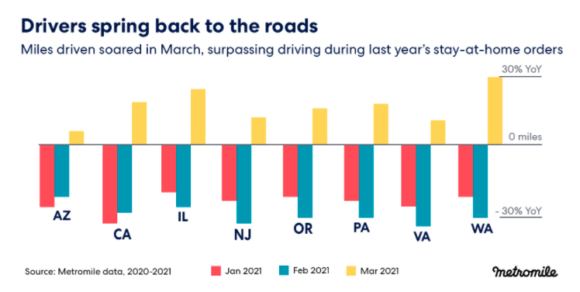 “Overall miles driven and trips taken might not see a significant decline, but more telework would still lead to fewer rush-hour trips, less congestion in urban areas, and freer movement of remaining traffic,” the 2021 Crash Course report written by analyst Susanna Gotsch says. “In many ways, the pandemic environment has given us some idea of what the future may look like, and what that means to our industry.”

Metromile posted a recent blog sharing data collected from the eight states where it sells insurance. The number of miles driven declined in all states at an average of 30% in 2020 compared to 2019 and continued to be 28% below prior-year levels in January and February 2021.

The number of miles driven in March was still 79% of miles driven in February 2020. Metromile said Illinois, at 29%, and Washington state, at 30%, experienced the largest gains in vehicle miles. The carrier said large employers in both states reopened offices.

But new driving trends are emerging. Metromile said roads may not become as congested as before as employers embrace hybrid work schedules.

“Folks are no longer driving in the evening and in the morning commute hours,” Chen said. “Instead they are driving mid-day. If you’re coming into the office, you’re only doing it a few days a week.”

The CCC Crash Course report cited data that suggests remote work is here to stay. A survey by Enterprise Technology Research of 1,200 chief information officers for global corporations showed permanent remote work is expected to double to 34.4% of company workforces in 2021, compared to 16.4% before the pandemic and 72% during the pandemic.

Numerous other studies have made similar projections, CCC said. The report says auto collision/liability claims were 24% below prior year levels for 2020, and dropped as low as 40% below the prior year levels during the second quarter.

CCC cited several studies that projected auto travel will increase as the global economy recovers from the pandemic, but also other studies that suggest driving patterns will change. Many long commutes may be eliminated, but they may be replaced by more frequent short trips, the report says.

“Overall miles driven and trips taken might not see a significant decline, but more telework would still lead to fewer rush-hour trips, less congestion in urban areas, and freer movement of remaining traffic. In many ways, the pandemic environment has given us some idea of what the future may look like, and what that means to our industry,” the report says.

The reports by Metromile, CCC and a report released by Fitch Ratings in March highlighted the down side of less congested roads: Speeding.

Metromile said speeding at 75 miles per hour or more was 74% higher from January to March 2021 compared to the previous year.

CCC noted that the National Highway Traffic Safety Administration reported the fatality rate per 100 vehicle miles traveled increased to 1.42 in the first half of 2020 compared to the same period of the prior year.

Fitch noted that the National Safety Council reported that automobile crash fatalities rose 8% in 2020 despite a 13% reduction in miles driven. On the bright side, Fitch noted major carriers saw auto claims frequency reductions from 12% to 30% in 2020.

“Declines in frequency were offset somewhat by more rapid growth in claims severity of 8%-10% for physical damage and 12%-13% for bodily injury,” Fitch said. “Underwriters point to accidents occurring at higher speeds in less crowded traffic conditions and distracted driving as contributors to these severity trends.”