The market for workers’ compensation insurance is in a recovery phase of the underwriting cycle after several years of poor results. In particular, premium rates continued to increase meaningfully through the first half of 2013, coupled with stabilizing loss trends promoting improved near-term underwriting performance. The potential for enduring industry underwriting gains, however, remain less likely, given competitive forces, inherent claims expense and reserving uncertainty, and regulatory and legislative complexity.

The past economic recession greatly impacted workers’ compensation revenues as premiums are typically based on payrolls, which sharply deteriorated with expanding unemployment levels. These economic factors, coupled with several years of price competition and consistent loss cost growth, which exceeded inflation, promoted strong underwriting loss expansion from 2007-2011. The industry aggregate statutory calendar-year combined ratio in workers’ compensation peaked at a highly unprofitable 117 in 2011.

The workers’ comp segment historically has produced an underwriting profit only once in the last 15 years.

For the five-year period 2008-2012, workers’ compensation generated an average statutory combined ratio of over 110, nearly 7 points worse than the commercial lines industry aggregate for the same period. Loss reserves from prior underwriting periods in the workers’ compensation line have developed unfavorably in each of the last four consecutive years, compared with continued favorable loss experience in all other lines combined over that period.

The U.S. commercial lines underwriting cycle tilted toward a hardening phase in the second half of 2011 as market participants responded to growing underwriting losses and a declining investment contribution to earnings from persistent low interest rates. Premium rate increases have endured in commercial lines through the first half of 2013, and the worst-performing market segments — including workers’ compensation — have experienced the most substantial price hikes. According to the quarterly commercial lines market survey published by the Council of Insurance Agents and Brokers, workers’ comp rates have increased for the last nine consecutive quarters. The most recent (second-quarter 2013) survey reported an average quarterly rate increase of 8.3 percent in workers’ comp.

Premium rate increases and a modest economic recovery have promoted a return to healthier premium growth in the workers’ compensation line. Industry workers’ compensation net written premium volume increased by 7 percent in both 2011 and 2012 — the largest change of all major commercial insurance market segments.

A review of statutory underwriting results for the top 10 writers of workers’ compensation at year-end 2012 reveals significant disparities in company underwriting performance. The chart below shows the average statutory combined ratio from 2008-2012 and the change in net written premiums over the last five years in workers’ compensation insurance by company, revealing a distinct relationship between underwriting performance and premium growth over this period.

Despite past unfavorable market conditions, several insurers have generated consistent underwriting profits in this line. Companies among the leading writers of workers’ compensation that have combined ratios below 100 over the last five years include The Chubb Corp., Hartford Fire Group, National Indemnity Co. and Travelers Cos. Inc. These companies have expanded their premium bases over the period, while the industry’s aggregate workers’ compensation premiums declined by 14 percent from year-end 2007-2012.

The cumulative effects from successive renewal-price increases and generally stable economic trends are likely to promote further performance improvement going forward. However, the workers’ compensation segment historically has produced an underwriting profit only once in the last 15 years. The likelihood of the market generating consistent underwriting profits going forward remains slim.

The durability of the current market hardening phase remains in question due to factors tied to pricing and loss costs.

From a claims and loss costs perspective, medical costs remain a key cost driver of workers’ compensation claims. Medical severity was relatively stable in 2012 but historically has been a more volatile cost factor. Going forward, the impact of implementation of the Patient Protection and Affordable Care Act (PPACA) on the U.S. healthcare market and healthcare costs remains highly uncertain.

Besides potential changes in traditional regulatory and legislative requirements inherent to the workers’ compensation business, looming expiration of the Terrorism Risk Insurance Program Reauthorization Act (TRIPRA) at year-end 2014 creates additional uncertainty. Workers’ comp writers may have large aggregations of underwriting exposures to terrorist events occurring during the work day, particularly in larger urban centers. TRIPRA and its predecessor programs since November 2002 have provided a risk-sharing mechanism between private insurers and the federal government in the event of a large-scale terrorist event.

Elimination of this government-sponsored reinsurance protection would increase net exposures to terror events for many domestic commercial insurers. Unlike commercial property and other lines, workers’ comp insurers are not allowed by statute to exclude terrorism in policy coverage. In the event of a TRIPRA non-renewal, the inability to exclude terrorism may induce workers’ comp underwriters to withdraw from the market, creating greater difficulty for policyholders to find coverage and increasing premium rates. 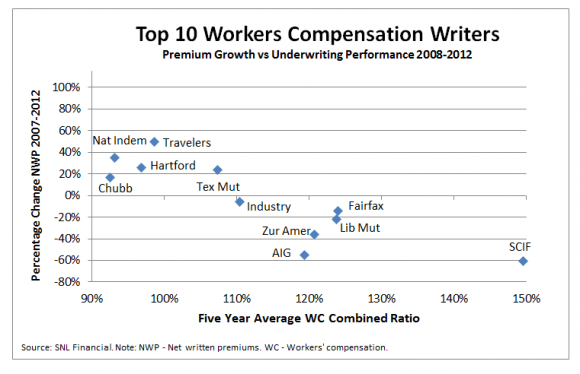