New York officials say they will take a “measured approach” in considering changes to how the state regulates the incentive fees insurance companies pay agents and brokers.

Acting Superintendent of Insurance Howard Mills and Sen. James Seward (R-Oneonta), chairman of the Senate Insurance Committee, told the Independent Insurance Agents & Brokers of New York Inc. last week that they would not seek “stringent” regulation governing how the fees are paid or disclosed to clients. Mills and Sen. Seward spoke in Albany at separate events sponsored by IIABNY.

The events were part of Legislative Day, or L-Day, IIABNY’s annual discussion between its members and representatives of the New York Assembly and Senate.

According to Seward, New York will not impose stringent requirements on the state’s independent insurance agents, brokers and carriers on how compensation is disclosed to clients. “When you boil it all down,” Seward said, “it involves a few mega-brokers who committed acts of bid-rigging, clearly against the law and should be dealt with in that fashion.” 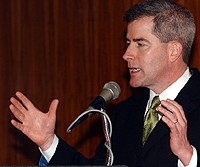 Seward promised to separate independent agents and brokers from the industry giants. “There’s a big, big difference in my mind between a mega-broker who has a great deal of market share and power and the typical independent agent who operates in the neighborhoods across upstate and downstate New York,” Seward said.

Seward maintained that the commission of crimes in the commercial market does not necessarily mean the entire insurance industry should be restructured.

Mills told an audience of about 200 IIABNY members and other invited guests that he would not “rush” to issue regulations governing agent and broker incentive agreements.

However, Mills added, “If you’re looking at contingent commissions that are just volume driven, there seems to be an obvious conflict with a fiduciary responsibility, and that’s something we saw with the settlement yesterday,” Mills said, referring to the $850 million settlement reached between Marsh & McLennan Companies, the New York State Attorney General’s Office and Insurance Department.

Mills was appointed acting Superintendent by Gov. George Pataki when Gregory V. Serio announced his resignation in December, and is awaiting confirmation by the Republican- controlled Senate.

On another issue before Seward’s committee this legislative session is anti-fraud auto insurance reforms that passed last year in his house but did not go to Gov. Pataki for his signature because of unreconciled differences with a reform package promoted by Democrats in the Assembly Majority.