New Hampshire lawmakers are urging nervous landowners to leave their properties open to recreation while they work to improve their liability protections.

State Rep. Gene Chandler, a Bartlett Republican, and state Sen. Andy Sanborn, a Henniker Republican, are heading up a group working on legislation to ensure as much of New Hampshire’s private lands remain open to recreation as possible. Many landowners fear legal liability if they keep their land open to bird-watchers, hikers, hunters and sporting vehicles.

State law limits landowners’ liability as a way to encourage them to keep their land accessible. The law does not require them to keep the land safe for use or to give warnings of hazardous conditions or structures.

Landowners and lawmakers, however, are concerned of a possible chilling effect from a lawsuit brought by William Jasmin, a 51-year-old Manchester hunter who fell about 20 feet when a tree stand collapsed. Jasmin was severely injured; his lawsuit was first reported by the Concord Monitor.

“We just want the landowners to know we take this action very seriously,” said Chandler said at a Thursday news conference. 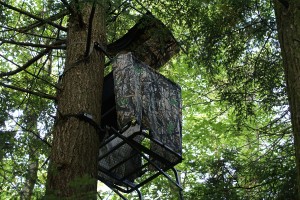 The lawsuit centers on whether the landowner gave Jasmin permission to hunt in exchange for killing as many coyotes as possible and told him about the tree stand. Sanborn and Chandler said the law isn’t clear on whether landowners are protected from liability when they get something in return for allowing people onto the property.

“Giving someone a gallon of maple syrup could be compensation,” said Sanborn.

Sanborn said he had hoped to push a bill through the Legislature this fall to further protect landowners, but the issue was too complex to rush.

“It’s been landowner access which has allowed all of us to enjoy the state and created the market which we all know is tourism,” said Sanborn.

Sanborn said the economic benefit from snowmobiling to the state was about $1 billion last year while hunting had a $560 million impact.

The two lawmakers and representatives of the New Hampshire Timberland Owners Association, the state farm bureau, state fish and game and New Hampshire Wildlife Federation urged landowners to be patient.

Jasen Stock, executive director of the timberland owners association, said one 1,400-acre tract of land in Grafton County was closed in response to the lawsuit and several smaller parcels had been posted to bar access.

Stock said his members control 1 million acres in the state and would like to continue New Hampshire’s tradition of leaving the land open. His group is working with lawmakers on the legislation.

Jeff Holmes, a farmer from Langdon and president of the New Hampshire Farm Bureau, said the bureau’s members own a combined 250,000 acres and that many members also are nervous about being sued. He said the bureau will work with legislators to change the law.

Similarly, Rick Olson of the wildlife federation said his group is worried and has begun talking about what it would take to start a legal defense fund for landowners.

Sanborn said even a small parcel being closed could disrupt snowmobile access to trails running the length of the state.

Chris Gamache, chief of the state’s trails bureau, said snowmobile clubs had gotten calls from landowners, but so far none had closed their land. He said the state insures 5,000 landowners for snowmobile and all-terrain vehicles using their land, but some landowners are still concerned about being fully protected. Snowmobilers can’t go on the trails until Dec. 15, which means landowners have months to decide about closing their property to snowmobiles, he said.