Climate scientist Michael Oppenheimer stood along the Hudson River and watched his research come to life as Hurricane Sandy blew through New York.

Just eight months earlier, the Princeton University professor reported that what used to be once-in-a-century devastating floods in New York City would soon happen every three to 20 years. He blamed global warming for pushing up sea levels and changing hurricane patterns. 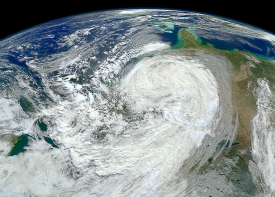 For more than a dozen years, Oppenheimer and other climate scientists have been warning about the risk for big storms and serious flooding in New York. A 2000 federal report about global warming’s effect on the United States warned specifically of that possibility.

Still, they say it’s unfair to blame climate change for Sandy and the destruction it left behind. They cautioned that they cannot yet conclusively link a single storm to global warming, and any connection is not as clear and simple as environmental activists might contend.

“The ingredients of this storm seem a little bit cooked by climate change, but the overall storm is difficult to attribute to global warming,” Canada’s University of Victoria climate scientist Andrew Weaver said.

Some individual parts of Sandy and its wrath seem to be influenced by climate change, several climate scientists said.

Add to that the temperature of the Atlantic Ocean, which is about 2 degrees Fahrenheit (.8 degrees Celsius) warmer on average than a century ago, said Katharine Hayhoe, a climate scientist at Texas Tech University. Warm water fuels hurricanes.

And Sandy zipped north along a warmer-than-normal Gulf Stream that travels from the Caribbean to Ireland, said Jeff Masters, meteorology director for the private service Weather Underground.

Meteorologists are also noticing more hurricanes late in the season and even after the season. A 2008 study said the Atlantic hurricane season seems to be starting earlier and lasting longer but found no explicit link to global warming. Normally there are 11 named Atlantic storms. The past two years have seen 19 and 18 named storms. This year, with one month to go, there are 19.

After years of disagreement, climate scientists and hurricane experts have concluded that as the climate warms, there will be fewer total hurricanes. But those storms that do develop will be stronger and wetter.

Sandy took an unprecedented sharp left turn into New Jersey. Usually storms keep heading north and turn east harmlessly out to sea. But a strong ridge of high pressure centered over Greenland blocked Sandy from going north or east, according to the National Hurricane Center.

Jennifer Francis of Rutgers University, an expert in how a warming Arctic affects extreme weather patterns, said recent warming in the Arctic may have played a role in enlarging or prolonging that high pressure area. But she cautioned it’s not clear whether the warming really had that influence on Sandy.

On Tuesday, both New York Mayor Michael Bloomberg and Gov. Andrew Cuomo said they couldn’t help but notice that extreme events like Sandy are causing them more and more trouble.

“What is clear is that the storms that we’ve experienced in the last year or so, around this country and around the world, are much more severe than before,” Bloomberg said. “Whether that’s global warming or what, I don’t know. But we’ll have to address those issues.”

“Anyone who says that there’s not a dramatic change in weather patterns I think is denying reality,” Cuomo said. “I told the president the other day: `We have a 100-year flood every two years now.”‘

For his published research, Oppenheimer looked at New York City’s record flood of 1821. Sandy flooded even higher. This week’s damage was augmented by the past century’s sea level rise, which was higher than the world average because of unusual coastal geography and ocean currents. Oppenheimer walked from his Manhattan home to the river Monday evening to watch the storm.

“We sort of knew it could happen, but you know that’s different from actually standing there and watching it happen,” Oppenheimer said from a cell phone. “You don’t really imagine what this looks like until you see it.”