New York legislators are pledging to change laws that have allowed predatory lenders to use the state court system to seize the assets of thousands of small businesses across the country.

“New Yorkers would be astounded to find out that our state is an outlier when it comes to the use and abuse of confessions of judgment and the punitive impact on small businesses,” said Hoylman, a Manhattan Democrat.

Confessions are legal instruments that lenders use to win court judgments against debtors without a judge’s involvement. Bloomberg News reported last month that merchant cash-advance companies have obtained more than 25,000 judgments against small-business borrowers since 2012 by filing confessions with New York county clerks. In interviews and court pleadings, borrowers described lenders who forged documents, lied about how much they were owed or fabricated defaults out of thin air.

Hoylman’s Assembly counterpart, Jeffrey Dinowitz, also called for a review of the law in an interview, and Senator Liz Krueger and Assembly members Ron Kim and Yuh-Line Niou issued statements. All are Democrats. The party controls the Assembly and will take over the Senate when the legislative session begins next month. Governor Andrew Cuomo, also a Democrat, didn’t respond to requests for comment.

Cash-advance companies require borrowers across the country to sign a New York confession as a condition of a loan. Later, they can accuse a borrower of defaulting, enter a judgment and seize the borrower’s bank deposits and other assets before the borrower knows what’s going on.

“We are now fully aware of the extent of the problem and are considering a number of possible legislative and/or operational solutions,” said Lucian Chalfen, a spokesman for the state Unified Court System.

The Washington-based Small Business Finance Association, which represents some merchant cash-advance companies and other alternative lenders, supports the Brown-Rubio proposal as well as state efforts to prevent the abuse of confessions, said Executive Director Stephen Denis.

Assemblyman Kim, who represents part of Queens and is running for New York City public advocate, said in a statement that he will introduce a bill to criminalize confessions of judgment in the state and to cancel the debts of borrowers who have signed one.

Hoylman said New York should follow the lead of states such as California and Pennsylvania, which place more restrictions on the use of confessions to prevent abuse. He also said he’d explore changing or abolishing the New York City marshal system, which is governed by state law.

The city’s 35 marshals are mayoral appointees who enforce court judgments, earning 5 percent of money they recover for creditors. One marshal in Brooklyn, Vadim Barbarovich, earned $1.7 million last year and specializes in seizing bank accounts on behalf of cash-advance firms. That made him the highest earning official in the city.

Krueger, the incoming chairman of the Senate Finance Committee, said in a statement that she also would seek changes in the marshal program. She added that lawmakers should clarify that cash advances are loans and therefore subject to state usury laws. These laws limit interest to 25 percent.

Under current law, most New York judges accept the industry’s contention that cash advances aren’t loans, allowing them to charge for their services at an effective annual rate of 400 percent or more.

“It’s shameful that New York is complicit in this predatory usury that’s destroying businesses and lives around the country,” Krueger said. “So many other states have regulated these practices. New York should too.” 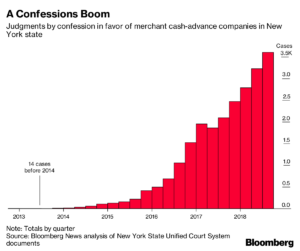