While the official death toll may never be known, the reaction to last month’s killer earthquake and tsunamis in Southeast Asia continues.

Insurance Journal recently spoke with several individuals whose companies have seen the death and destruction up close. Crawford & Company (www.crawfordandcompany.com) and GAB Robins (www.gabrobins.com) are among the industry adjusters on the ground in several countries in the region and surrounding areas.

“Initial reactions to the devastation were complete shock on how such a large area could be affected in such a short period of time,” Crawford & Co.’s Executive General Adjuster Paul Hough said from Indonesia. “Indonesia has responded very well to the incident. There are logistical difficulties when dealing with any incident on this scale not least because the Police and Security Forces suffered substantial losses during the incident which affects any catastrophe management system that may have been in place. However, these difficulties are compounded by the troubles that have recently affected this region of Indonesia, where separatists are seeking to break Aceh away from Indonesia.” 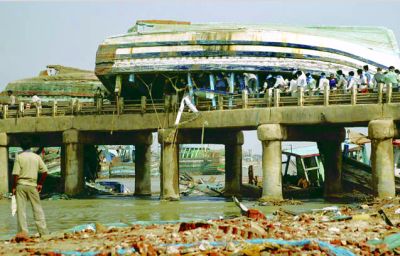 Onlookers look at one of the many damaged fishing trawlers in Southeast Asia. Reuters 2005

While the damages were beyond what most people will see in their lifetime, Hough noted that from an insurance perspective, losses were not that large.

“Insurance coverage in Aceh is limited primarily because of the troubles that have affected everyday life in Aceh,” Hough continued. “This has resulted in insurers being reluctant to open offices in the region and provide coverage. Furthermore, because of the proximity of Aceh to a fault line, the insurance premiums for most individuals and companies, where earthquake coverage is available, are prohibitively expensive. Accordingly, the number of claims that have been submitted to insurers, in respect of property damage is, to date, small.”

In Malaysia, the northern states were affected by the tsunami and Crawford & Co. Managing Director Phillip Fong noted that his colleague, Philip Foo, a director of the company based in Penang and his team, witnessed the full effects of this tragic event. “Philip and his team were on hand to promptly attend to the losses intimated and together with all our other colleagues in the company, played our respective parts to help those who were affected and in need of help,” Fong said.

When asked for initial reactions to the devastation, Fong said that, “We were surprised at and saddened by the magnitude of the resultant property damage and death toll and wondered what would have been the extent on human lives and the value of those insured properties that had been affected. Immediate inquiries were made to check on whether any of the hotels and private clubs along the coastal area of the island had been affected. The government bodies have acted promptly by sending aid to the affected areas whilst urging for voluntarily help and support from the citizens, corporations and other social organizations alike.”

According to Fong, most homes and hotels on Penang Island were unaffected with only a few suffering nominal damage. A few hotels on Langkawi Island, however, suffered quite extensive damage, with most having either earthquake or flood coverage.

“The impact on the businesses of the coastal hotels in Malaysia will be nominal, if any at all,” Fong commented. “People have short memories, and the tourists and locals will return and those earning a living in the sea or near the shore lines, will have to continue with their work, albeit with more knowledge now -in that earthquake and tsunamis are now real as it had happened in their shores before.”

Crawford Managing Director of the Thailand office, Jim Beattie, noted that, “On a professional level, we know as adjusters that a presence on the ground is urgently required from us. This is to be able to better co-ordinate the response of insurers to ensure that the correct actions are taken at the outset so that systems can be put in place to utilize available insurance to eleviate the hardships being suffered and to assist with a return to normalcy as soon as possible. Therefore, shortly after the news first broke, we dispatched a team of our staff to Phuket area to provide this on the ground presence. However, as the scale of the disaster filtered through, we activated the Crawford pre-set Regional Catastrophe Plan, which allowed us to immediately draw support from our extensive regional and worldwide orginization to provide us with additional personnel and expertise as required to assist our Thailand staff.”

According to Beattie, the areas hit by the tsunami are of course close to the sea. The coastlines affected are almost exclusively tourist areas. The damage is therefore almost exclusively to tourist hotels, shops, bars and other facilities. There are housing developments in that area but these were mostly holiday homes. Most of these facilities had some type of insurance.

“However, many of the smaller tourist facilities are owned by local Thais,” Beattie noted. “They originally had only their house on their plot of land but as the tourist business expanded they built small guest houses, restaurants etc on their property. Therefore many of these people not only lost their businesses but also lost their homes and many of them their lives. However, for various reasons, economic, cultural etc, they did not have any insurance.”

Kieran Rigby, CEO of GAB Robins for Asia/Australia, commented that it has taken some time for the magnitude of this event to sink in for everyone.

“Initial reactions on a personal level were ones of shock and disbelief at the scale of human loss and destruction,” Rigby said. “Within hours of the event our people were mobilized in our operations throughout Southeast Asia and the Indian rim. The initial task was to get field personnel into the areas to make preliminary assessment of the overall resouces which would be required whilst also responding to specific client needs. By December 27 we had established our Regional Tsunami Co-ordination centre in Hong Kong to provide a single focal point for clients, direct field operations, provide data to clients and manage the regional resources and international GAB Robins support.”

According to Rigby, from an insurance perspective, the levels of insurable damage are modest when compared to the widespread devastation in some areas. In many instances, homes and smaller resorts may not have any coverage and most of the losses being witnessed involve the larger hotels and resorts, some utility companies and manufacturing operations. “In many cases, whilst there is a property damage coverage in force, there is no business interruption element,” Rigby pointed out.

Back in Indoneisa, bringing normalcy back to people’s lives in the Aceh region of Indonesia will take weeks, months and in some cases, years.

“There are many challenges to the people of Aceh to return some normality to their lives,” Crawford’s Hough commented. The tsunami has devastated many families both with the loss of life and also with the loss of income as offices, shops and other places of employment have been destroyed. In the short term, there will need to be a complete rebuilding of the infrastructure including roads, telecommunications, water services, sanitation, electricity, etc. This will allow some semblance of order to return to the area. However, more long-term problems will be rebuilding schools, government buildings, place of business and other essential facilities to allow the economy to develop again.

“Unfortunately, this will be compounded by the troubles which have dogged the area and will undoubtedly have an impact on the ability of the government and aid agencies to complete their tasks. The Indonesian government have advised that they believe that the reconstruction of the area and redevelopment of the economy will take more than five years.”

While cleanup continues and in some cases the search for bodies goes on, Hough said that the response to the crisis by the United States and other countries has not gone unnoticed.

“The reaction of the international community to this crisis has been exemplary,” Hough said. “Many countries including our neighbors within the ASEAN region have offered and provided both financial and physical assistance; both at a government and a personal level. As mentioned above, there are logistical problems of working in the Aceh and accessing the affected areas. The aid agencies and the foreign governments have worked closely with the local authorities to get the necessary aid to the affected areas as soon as possible. There have been difficulties but, given the size of the area affected, these were inevitable, particularly as the tsunami has affected the local infrastructure.”

According to Crawford’s Fong, “All these countries have done their part to assist in the relief works as well as in providing the essential aids to the affected region, although we thought the United States and perhaps some of the more affluent countries could have responded and reacted to the situation faster.”

As GAB Robin’s Rigby noted, “It is pleasing to see the rapid international responses both governmental and by private citizens and corporations. Perhaps the showstopper to date is the announcement by the Australian government that it will provide AUS$1bn in aid to the region with particular focus on Indonesia. In any event, it it hoped that the levels of support and aid will facilitate the rebuilding of necessary infrastructure in the affected regions to faciltate the return to normalcy.”

How will this crisis impact the industry over the long haul?

According to Hough, “Within Aceh, there has been little impact upon the insurance industry and accordingly locally there is unlikely to been any significant lessons learnt from the tsunami. However, as more details of losses become available this is likely to affect underwriters’ views with regard to earthquake and tsunami coverage.”

And as Fong noted, “There is a need to be more compassionate when dealing with claims from these claimants and as an industry overall, it would be good to expeditiously address the issues of policy coverage and benefit entitlements.”

And will this event change any minds?

As Rigby stated, “First, the event has highlighted the absolute need for an early warning system in the region. However, that will likely deal mainly with the human side of events only rather than the associated property damage. Whilst I cannot purport to speak for underwriters in the region I am sure that many will be reviewing terms for beachside properties in terms of exposure to this type of risk.”

No doubt changes will be a required way of life and not an option for many in the region.

Editor’s note: We are aware that a number of countries were impacted by this disaster. Those interviewed were available to us in their respective countries at the time of this story.