In a year-on-year comparison, the nominal increase – after adjustments to reflect foreign currency translation effects – comes to an estimated 4.4 percent.

At first glance, according to Allianz, this trend would appear to be fairly unspectacular because although the pace of growth is down slightly on the two previous years – when it was above the five percent mark – it is in line with both the long-term average and the rate of global economic growth.

But the Allianz Global Insurance map and analysis show that 2016 was not a normal year.

At second glance, it is evident that out of the 150 billion euros or so in additional premiums, almost 70 billion euros is attributable to one market alone: China. This means that the Middle Kingdom is responsible for close to half of last year’s growth; without China, the insurance world would have achieved growth of only 2.7 percent. 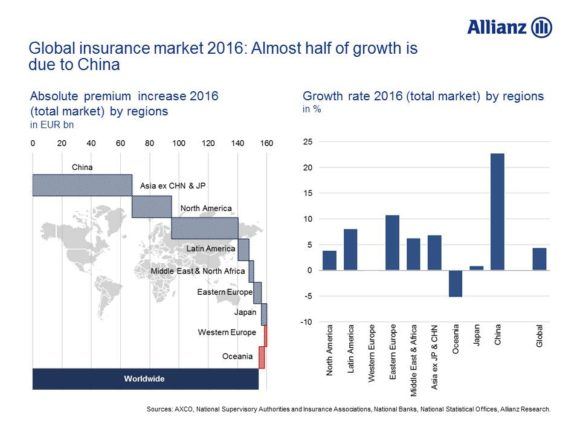 The “China effect” was particularly pronounced in the life insurance business, where excluding the Chinese contribution from the equation would more than halve the rate of global growth from a respectable 4.7 percent to 2.3 percent in 2016. This is due, for one thing, to the rapid development in China itself: last year saw the Chinese life insurance market report the highest rate of growth seen since 2008, at over 30 percent. Although per capita spending on life insurance products (at around 170 euros) still has a long way to go before it catches up with the average for the developed countries, China has already overtaken Austria in terms of the insurance penetration rate, i.e. gross written premiums expressed as a percentage of economic output, and with 2.4 percent is also within striking distance of the Germans, who are often described as real life insurance enthusiasts: the life insurance penetration rate in Germany came to 2.7 percent last year (which, incidentally, is also well below the western European average of 4.7 percent). But this certainly does not signal the end of China’s catch-up process.

Like their Chinese neighbors in Hong Kong and Taiwan, where the penetration rates top the international league table at 15 percent and 16 percent, respectively, the mainland Chinese are also having to set an increasing amount of money aside for their old age. 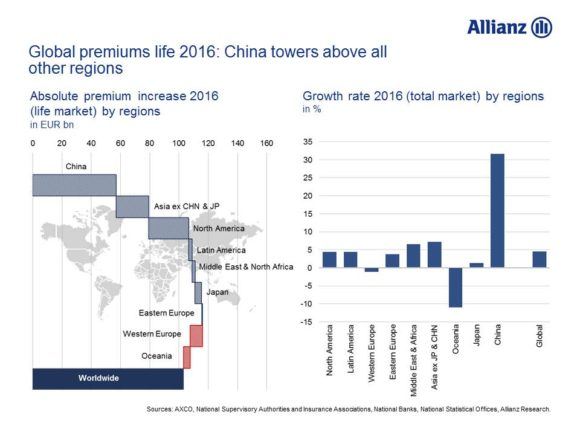 A second explanation for this Chinese dominance can also be attributed to the slump on the life insurance markets elsewhere in the world. In western Europe, premium income is expected to have dropped by 1.2 percent overall in 2016, the first negative trend seen since 2012. And this certainly isn’t a predicament that is limited to western Europe.

The markets also contracted in parts of eastern Europe (i.e. in Poland and the Czech Republic, both for the fourth year running) and Australia (for the second year in a row) last year. On the other hand, Russia, Turkey and many of Asia’s emerging markets – India, Indonesia and Vietnam for example – are reporting double-digit growth rates, with the US also reporting solid development. This means that, all in all, global premium income in the life insurance sector increased by an estimated 4.7 percent to total 2,300 billion euros. Just under two-thirds of global insurance premiums (excluding health insurance) are still attributable to the life insurance business.

Developments in the property/casualty insurance segment have always been less volatile, with a much smaller margin of fluctuation both ways than in the life insurance business. So only a handful of markets – albeit including countries like Italy and Japan – reported negative growth rates in 2016. All in all, global gross written premiums in the P/C insurance segment are likely to have increased by 4.0 percent. This would be the weakest figure since 2010, after five years of growth averaging more than 5 percent. 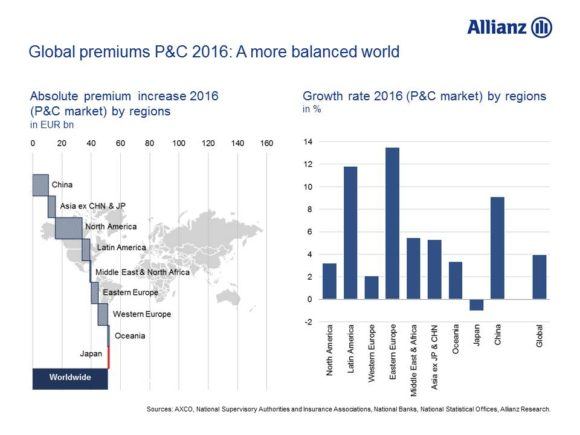 The somewhat disappointing development last year is, however, almost an exact reflection of the drop in momentum in the global economy and global trade – both of which also fell slightly short of expectations in 2016. China did not manage to escape this development entirely unscathed either, with its economic growth rate dropping further and the P/C insurance market reporting growth of “only” 9 percent as a result – the first time it had dipped below the 10 percent mark since the 1990s. This also means that the global trend is much less reliant on China in the P/C segment, with only one-fifth of last year’s global growth attributable to the Chinese market.

The Allianz projections suggest that western Europe achieved very solid growth – by its standards – of 2.1 percent last year. This is only the second time since the financial and euro crisis, after 2015, that growth in the P/C business has managed to climb back past the 2 percent mark again. Overall, however – looking at both the life and P/C insurance segments – the western European insurance market stagnated. As a result, its share of the global market contracted further to around 27 percent in 2016, as against 36 percent ten years ago.

This means that the advancement of China and other emerging markets is gradually eroding western Europe’s weight on the global market. Interestingly, this does not apply to the same extent to the North American market, whose share of the global market has been relatively stable at around 33 percent for some years now. Although the North American market share is also lagging behind the pre-crisis level, the 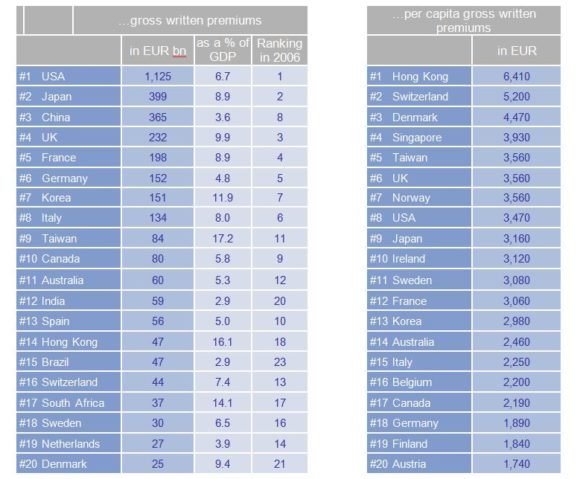 drop is less dramatic. This also becomes clear in a direct comparison: whereas at the start of the millennium, the insurance markets in North America and western Europe were virtually neck-and-neck in terms of total premium income, today’s North American market is around 20 percent bigger.

And the trend that applies to western Europe in general also applies specifically to Germany: Germany’s share of the global insurance market has been whittled down from 6 percent at the start of the millennium to 4.2 percent last year. Germany was at least able to defend its third place in Europe – behind the UK and France; in the global rankings, it was bypassed only by China, but could see Korea overtake it before the year is out. In per capita terms, on the other hand, Germany ranks a (disappointing) 18th worldwide, putting it far behind some of its European neighbors. By way of example, the Germans on average spend only around half as much a year on insurance as their British counterparts do; the French (+62 percent) and Italians (+19 percent) also spend a lot more on insurance cover.