The reluctance of foreign banks to deal with Iran could complicate any compensation payments resulting from the collision last week of an Iranian oil tanker and a Chinese cargo ship, sources say.

The tanker Sanchi, carrying 136,000 tonnes of highly flammable condensate oil, collided with the Chinese dry cargo vessel CF Crystal on Saturday in the East China Sea, causing an oil spill and a blaze that is still raging four days later.

Liability has yet to be established, but lawyers and insurers say, wherever the fault lies, compensation payments risk getting bogged down or even blocked because the tanker and most of its crew were from Iran.

The potential hitches stem from U.S. restrictions on financial transactions with Iran still in place despite the lifting of international sanctions against the country in 2016 following its nuclear deal with world powers, lawyers say.

The Sanchi’s $60 million cargo of ultra-light crude oil spilled into the ocean and caught fire after the collision in international waters some 160 nautical miles (300 km) off China.

While the CF Crystal has returned safely to port with its crew, dozens of rescue boats from China and South Korea have been battling strong winds, high waves and poisonous fumes to try to find 31 sailors from the Sanchi and tame the fire.

Rahul Khanna, global head of marine risk consulting with German insurer Allianz, said losses from the collision could be in the hundreds of millions of dollars.

“The value of the cargo and the value of the hull itself would be one major impact, but I think the oil pollution liability aspects are probably the largest element,” he said.

He said the environmental impact would be less severe than for a heavy crude spill, however, as condensate evaporates quickly and would not cause a major oil slick.

Some lawyers said there would be payment problems whether Iranian parties were the beneficiaries of any compensation, or if they were found liable.

Nigel Kushner, chief executive of law firm W Legal and an Iran specialist, said any compensation process would be complex as there were four different insurance issues at play: the ship itself, or the hull, the cargo, pollution and the deceased.

Thirty of the Sanchi’s crew are from Iran and two are from Bangladesh. One body has been recovered from the sea but the rest are missing. The vessel (IMO:9356608) is run by Iran’s top oil shipping operator, NITC.

“It will probably be perfectly legal for insurers to pay, but in practice near impossible,” Kushner said.

“Numerous insurers will be involved requiring multiple payments,” he said. “I have seen lengthy and frustrating delays for clients previously with respect to insurance payments coming out of the Lloyd’s [insurance] market when payments are delayed or blocked.”

Under U.S. sanctions, U.S. financial institutions and are prohibited from any trade with Iran, despite the nuclear deal struck in 2015, known as the JCPOA.

While non-U.S. banks can do business with Iran, lawyers say transactions involving U.S. dollars can be problematic as they must not involve the U.S. financial system in any way and that can be difficult in practice.

Banks and individuals are still restricted from trade with individuals or entities that remain on a U.S. blacklist, adding to further caution over any business with Iran.

Transactions in other currencies are allowed, but lawyers say large Western banks, for example, are wary of dealing with Iran in case they fall foul of existing U.S. sanctions.

“As a general matter, despite the sanctions relief contained within the JCPOA, there is still great difficulty in Western banks processing payments to Iranian counterparties, no matter the currency,” said Matthew Oresman, a partner with Pillsbury Winthrop Shaw Pittman, who advises companies on Iran compliance.

“For this specific incident, depending on the source of the insurance funds and the process by which it is to be delivered to Iranian recipients, there could be difficulties for the policy holders or other beneficiaries,” he said.

In recent years, compensation claims for major oil pollution incidents have largely been handled by the International Oil Pollution Compensation Funds (IOPC Funds) inter-governmental body. It typically steps in to provide compensation for disasters over and above insurance company caps on payouts.

Maritime officials say compensation this time would fall under China’s far smaller scheme known as the COPC Fund, partly because the oil in question is condensate which is not covered by IOPC Funds.

Xia Jun, a Beijing-based environmental lawyer, said the Chinese government would calculate the losses arising from pollution to the environment and fishing sector.

In the case of the Panama-flagged Sanchi, it is insured for P&I by Steamship Mutual based in London.

“The vessel is entered with the Club and we have been very busy over the weekend with our emergency response. Clearly a major incident and we are doing all we can to support the members,” Steamship said.

Seventy percent of the value of Sanchi itself is covered by 11 international insurers, led by Norway’s Skuld, with the other 30 percent covered by Iranian insurers, according to Skuld Chief Executive Stale Hansen.

Skuld also covers the Hong Kong-flagged CF Crystal (IMO:9497050) for protection and indemnity while the vessel’s hull is covered by a Chinese insurer.

“The major issue with this case is going to be the banking issue,” said a shipping source familiar with the incident. “There is a degree of paralysis among banks.”

An Iranian government official acknowledged that when it came to the collision involving Sanchi there may be banking issues, though he was optimistic a solution could be found.

“Major banks still refuse to do money transactions with Iran but there are tens of smaller banks willing to do such businesses,” the official said.

“Also, this is an extraordinary situation … Asian banks, especially Chinese banks, will surely help. There are several methods, including using local currencies or paying Iran’s debts somewhere else,” he said.

Chinese banks, however, have become more reticent about doing some business with Iran.

Iranian media reported in October that some had closed accounts of certain Iranian nationals in China due to tougher enforcement by Chinese banks of money laundering rules. FATF, an international body that monitors money laundering worldwide, has kept Iran on its blacklist of high-risk countries.

Andrew Bardot, executive officer of the International Group of P&I Clubs – the umbrella association for ship insurers that provide cover for pollution and injury claims – said any problems with compensation payments from the incident would stem from the banking sector rather than issues about legality.

“That being said, there are banks who have been and are able to facilitate Iranian related payments, which in the recent experience of the [International] Group have proved effective,” he said. 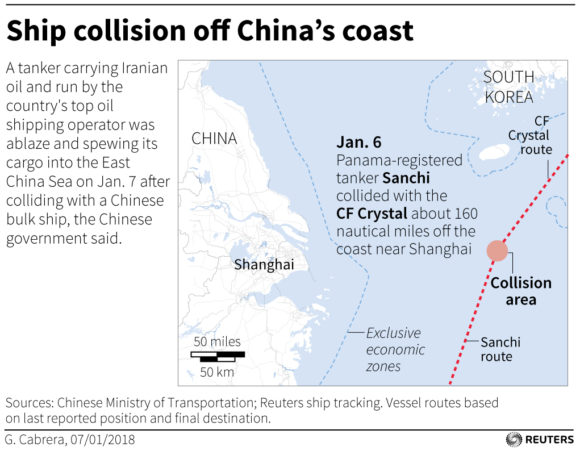