When the co-founder of a London communications group was invited to pitch for business with a Wall Street firm last November, the offer came with an unusual demand.

The document explained that 15 percent of the scorecard for the pitch was based on the firm being able to show its commitment to diversity and inclusion, Iain Anderson of Cicero Group said.

“It was the hardest measure I have so far seen,” Anderson said in an interview. “We would never have seen something like that quantified in such a way, even five years ago.”

Big companies, under pressure to increase diversity on their own boards and in senior positions, are attempting to spread this practice to those they spend money with, according to interviews with executives and independent directors. They want more diversity from their financial advisers, bankers, lawyers, public relations consultants and auditors — all of whom are also under pressure to become more inclusive.

Diageo Plc, the world’s largest distiller and owner of Johnnie Walker whiskey, is one of those pushing for change.

“When I go into a pitch for banking or accountancy services, I always ask about the diversity of the team,” Diageo’s Chief Finance Officer Kathryn Mikells, who joined in 2015, said. Diageo has four women on its 10-person board.

The efforts come at a time when conversations around workplace diversity and behavior could hardly be more in focus. While powerful men have stepped down from media, academia and politics since the Harvey Weinstein scandal, the financial community — home to banks and law firms that rely on corporate advisory roles for large chunks of revenue — has been largely unscathed.

That could still change. A report by the Financial Times last week exposed a men-only fundraiser in London at which hostesses were allegedly harassed, groped and insulted. Several companies said they would end their association with the event, and the club that organized the dinner has disbanded.

“What’s going on in business is part of a general shift in the way we think and talk about gender and gender relations,” said Professor Laura Empson of London’s Cass Business School. “The rhetoric is shifting very fast, attitudes are slower to change, and behaviors even slower.”

It was only in 2011 that the U.K. government started formalizing efforts to increase diversity across the business community. While lawmakers stopped short of setting quotas, they shone a light on the issue with a series of reports on the country’s biggest companies.

The share of female directors at FTSE 100 companies has risen from 17.3 percent in 2013 to 27.7 percent now, according to the Hampton Alexander Review. The group is aiming to boost that share to a third by 2020.

Other initiatives are playing catch up. Last October, the Parker Review published its first report on ethnic diversity in U.K. boardrooms. Of 1,050 director positions in total, directors of color represented only eight percent, compared to 14 percent of the general population. More than half of FTSE 100 companies had no ethnic minorities on the board, and just six had someone in the position of chairman or CEO.

The review’s objectives are less ambitious: every FTSE 100 board should have at least one director from an ethnic minority by 2021.

A spokesman for Virgin Money Holdings U.K. Plc said that when choosing an investment bank, it looks at whether it’s signed up to the Women in Finance Charter, a government-backed initiative to encourage women in financial services. The charter is led by the bank’s chief executive officer, Jayne-Anne Gadhia. Women hold four of 10 places on Virgin Money’s board and at least one director must be ethnically diverse.

Morgan Stanley and Deutsche Bank AG are among the 162 firms that had signed up as of November. Two more prominent investment banks in London are planning to join soon: A representative for JPMorgan Chase & Co. said in an statement it supports the goals of the charter and is considering signing up. Goldman Sachs also plans to join the list, a person familiar with the situation said.

Over in the U.S., Bank of America Corp. Chief Executive Officer Brian Moynihan said when he’s ready to give up the job, the odds are split on whether his successor will be a woman. That’s a bold statement: putting a woman in charge of a Wall Street firm would be historic.

Adding to pressure in the U.K. is an upcoming deadline for companies with more than 250 employees to publish pay ratios by gender. Few financial firms have so far reported ahead of the April 4 cut-off.

Insurer Aviva Plc, which in November introduced equal parental leave, said it encourages best practice and has written to suppliers with expectations for diverse and inclusive workplaces.

“We believe that having an inclusive culture and a diverse workforce makes good business sense,” said a spokeswoman. “We also believe it is the right thing to do.”

A McKinsey & Co. report this month seems to prove the theory. Companies in the top 25 percent for gender diversity on their executive teams were 21 percent more likely to outperform on profitability than those with the least diverse workforces, the study showed.

“When reviewing our relationship with law firms, I ensure that we look at their diversity statistics on gender, ethnic origin, LGBT diversity, and social mobility,” said Diageo’s general counsel, Siobhan Moriarty.

“Clients can and will lead behavior,” said Katushka Giltsoff, a senior adviser at headhunter The Miles Partnership with 20 years’ experience in financial services. “If clients are urging more diversity from their suppliers of financial services providers, those providers will jump.

“But it’s pretty poor that the investment banking industry has not matured sufficiently before now,” Giltsoff added. “Why on earth didn’t it respond earlier to its lack of maturity and machismo?”

Part of the reason could be that not everyone is convinced of the merits. One corporate broker, who has been pitching for client work for about 25 years, said that teams often don’t include a woman or someone of a different ethnic origin. The lack of diversity hasn’t lost them work, said the person, who asked not to be identified discussing private matters.

For Cicero’s Anderson, while it’s clear a shift is happening, it could take time for the impact to be felt.

“Things are changing rapidly,” said Anderson. “But is diversity moving the dial in terms of decisions? That’s not yet clear.” 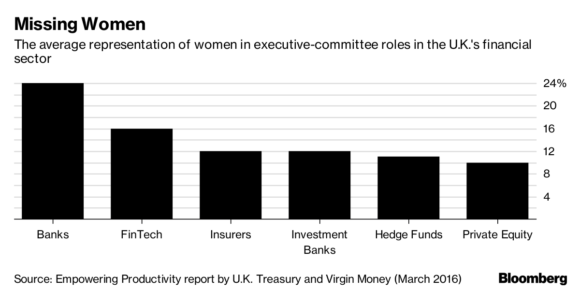