The historic city is still reeling from the 187-centimeter tide it recorded on Wednesday, the highest in half a century. Prime Minister Giuseppe Conte declared a state of emergency for the city late on Thursday, releasing 20 million euros ($22 million) for urgent repairs.

Bracing for Friday’s tide, Venice mayor Luigi Brugnaro closed St. Mark’s Square after the 11th century basilica there had flooded. The city’s water buses, known as vaporetti, were suspended because of the rising water, and schools in the area were closed.

While the frequency of flooding, known as “acqua alta,” has been increasing steadily in recent years, instances of water rising more than 150 centimeters above the benchmark are rare and usually occur about once in a decade. 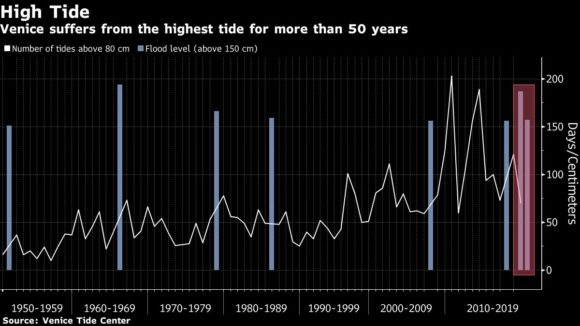 “Venice is the victim of climate change and corruption,” Italy’s Foreign Affairs Minister Luigi Di Maio said Thursday in Washington, according to Ansa. “I don’t know which is worse, but Venice is suffering from both.”

The Five Star Movement leader was referring to the mobile dams which are currently under construction to protect the Venice lagoon from exceptional tides. The project, dubbed MOSE, is way over budget at 5.5 billion euros and counting, and won’t be ready until at least 2022. It is the target of several corruption investigations by the judiciary and has been plagued by technical failures.

A 2017 report by the Italian National Agency for New Technologies, Energy and Sustainable Economic Development warned that Venice will be underwater within a century if climate change isn’t slowed and adequate defenses aren’t put in place. Wednesday’s flood waters peaked at the highest level since 1966.

–With assistance from Giovanni Salzano.

Photograph: A view of flooding on St. Mark’s Square on Nov. 14, 2019, which left much of Venice under water. Photo by Filippo Monteforte/AFP via Getty Images.