In the hills of northern Greece, peach farmer Makis Antoniadis is sweating in unseasonably warm November weather as he toils with his most recent harvest. It might be one of his last.

“I’m thinking about growing something else,” said the 56-year-old, who has followed in his father’s and grandfather’s footsteps in the fruit orchards of Kopanos. “Others in the village are looking to do the same.”

At the same time, U.S. President Donald Trump has been escalating his trade war, slapping tariffs on billions of dollars of European exports — including Greek canned peaches — in retaliation for illegal aid to Airbus SE.

While it’s a painful double whammy, Antoniadis said freak weather conditions worry him more than the effect of U.S. levies.

“The consequences of climate change are more significant and painful than Trump’s tariffs as we are already suffering from disastrous production in the last three years,” he told Bloomberg.

His struggles to cope could be in vain unless urgent action is taken on a global level. Despite street protests around the world, rising pollution levels suggest efforts to shift away from the dirtiest fuels are moving too slowly to have a major impact on preserving the environment.

Although the Antoniadis farm is in a mountainous region, the temperature exceeded 22 degrees Celsius (72 degrees Fahrenheit) in early November. He’s in short sleeves and drenched in perspiration.

“In the last few years, we’ve had unseasonal rainfall in June and July followed by ups and downs in the temperature with the result we’ve lost a large part of our production,” he said.

In 2017 and 2018, nearly all of his crop was ruined as the large volume of water leads to the fruit’s skin splitting and the fluctuation in temperature rots the peaches.

“We never saw such weather conditions in the past, now it rains non-stop for three days then four months go by before it rains again,” he said.

Kyriakos Tsitouridis, the head of the Meteorological Research Center of the Greek Agricultural Insurance Organization (ELGA), said farmers will have to switch to “crops that can survive in extreme weather conditions.”

He predicted an increase in average temperatures and rainfall and warned of catastrophic consequences for agricultural production. The government must act to ensure there are no shortages, he said. 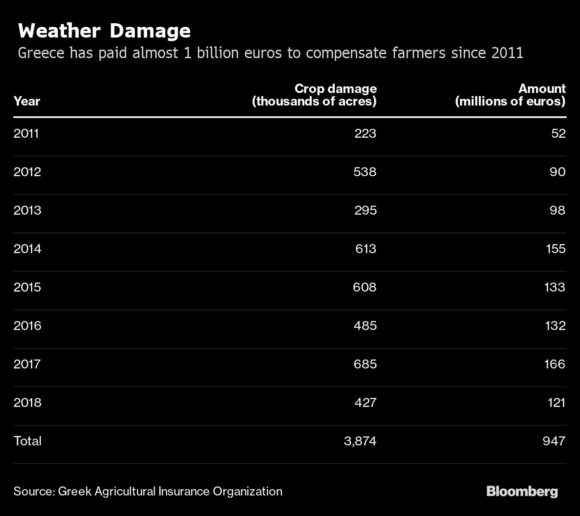 The total value of damage is even higher, as the ELGA only covers the cost of the direct impact from weather and not indirect effects, such as crop disease, said Fanis Kourebes, the organization’s chairman.

He cited a flare-up of diseases affecting grapes in the southern Peloponnese region and peaches and tobacco in northern Greece, where Antoniadis has his farm. At least for the time being.

“We can’t control this and we can’t always be compensated forever,” Antoniadis said.