German hunting dogs are being trained to sniff out dead wild boar, authorities are stockpiling electric fences along the eastern frontier and the government in Berlin is urging drivers not to toss ham-sandwich scraps out of their car windows.

These are just some of the measures Europe’s top pork producer is taking to try to thwart the deadly African swine fever (ASF) that’s roiled global meat trade and is moving ever closer to its borders. After it was detected in Belgium last year, the viral disease recently popped up across western Poland, placing it a few dozen kilometers from Germany on either side.

A confirmed German case would disrupt an industry deeply rooted in the home of bratwurst, currywurst and frankfurters. Despite its relatively small size compared with producers like China or the U.S., Germany is a heavyweight in the global pork trade — accounting for 15% of the world’s exports in 2017.

“We don’t know what will happen, but we are trained how to act and react,” German Agriculture Minister Julia Kloeckner said this week in Brussels. “For us, it’s important to inform everybody — to inform tourists, to inform the farmers, and to prevent swine fever.”

ASF, which is not a risk to human health, threatens to end the boom times for German hog farmers. EU pig prices are running near a six-year high, lifted by surging Chinese demand. Much of Asia is suffering from unprecedented ASF outbreaks, and importers may look elsewhere if Germany is struck by the disease.

The livestock industry remains in close contact with veterinarians about how to handle a potential outbreak, said Bernhard Kruesken, general secretary of the DBV farmers’ union. There is no approved vaccine against ASF, which is highly contagious.

Authorities are practicing measures they would take to cordon off sick swine and restrict the movement of everything from trucks carrying pigs to hunters and joggers.

“We’re waiting for day zero and hope it will not occur, but of course it’s a significant risk,” Kruesken said by telephone. Farmers “have the feeling of skating on very, very thin ice.”

While Germany is home to some 26 million hogs, most are raised indoors and farmers take strict steps to ward off disease. Agribusiness company BayWa AG has boosted supplies of disinfectants and hygiene sets so that they can be delivered immediately in the event of outbreak. 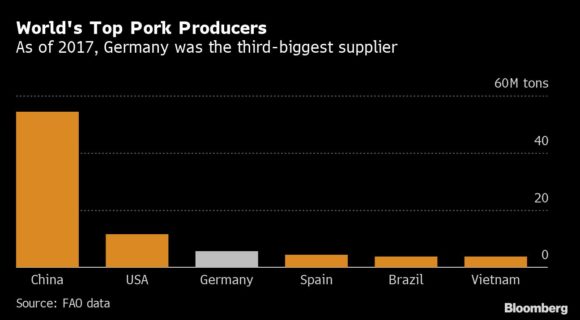 Wild boar roaming fields and forests potentially pose a bigger threat, and Germany has struggled to rein in its ballooning population.

Local authorities are increasingly legalizing non-traditional equipment for hunters, who can’t keep up with kill quotas for the elusive, nocturnal animals.

The southern states of Bavaria and Baden-Wuerttemberg allowed the use of night-vision gun attachments last year, clearing the way for boar hunting around the clock. Germany’s agriculture ministry is considering a nationwide legalization of the devices previously exclusive to the military and law enforcement.

In Saarland to the west, Hubertus Lehnhausen, who oversees forestry and hunting at the state environment ministry, has established a program that trains dogs to sniff out dead boar.

“I’m nearly astonished that swine fever didn’t arrive already, but it may arrive in a few days or a few weeks or a few months,” Lehnhausen said. “The faster we find the dead animals, the sooner we can get rid of this disease.”

The experience of neighboring Belgium may provide some hope that the disease won’t spill across the German border.

Eastern Europe hasn’t been as lucky, with more than 1,700 commercial or backyard operations struck by the virus in recent months.

Other nations are taking steps to protect themselves. To limit pig movement, Denmark built a fence along its border, while France erected a 132-kilometer (82-mile) barrier in the north.

Parts of Germany are following suit. The coastal Mecklenburg-Western Pomerania state stocked up on 50 kilometers of electric fence to cordon off any ASF cases, Agriculture Minister Till Backhaus said in a statement.

Nearby Brandenburg is erecting wildlife fences on its side of the Oder river on the German-Polish border. On Monday, local media reported that Polish hunters found an infected hog carcass drifting some 80 kilometers upstream from Germany.

The scale of the challenge is huge. Given Germany’s lengthy borders, securing them entirely may prove impossible.

“If you build a fence 500 or more kilometers in the middle of Europe, it’s not so easy,” said Matthias Quaing, an analyst at the ISN pig producers’ association near Osnabrueck. For swine fever, “we can have it tomorrow, but it’s also possible that in the next 10 years, we don’t have it. We don’t know.”

–With assistance from William Wilkes and Dominic Carey.