Climate change is adding to the risk of fierce wildfires in Australia, according to a scientific study of this season’s blazes that razed an area the size of England and killed dozens of people and more than a billion animals.

Long-term warming trends have boosted the chances of Australia experiencing extreme fire weather similar to that seen this season by at least 30%, which is likely a conservative estimate, according to the report by the World Weather Attribution group. The most recent fires were also influenced by other factors such as a severe drought partly shaped by natural climate patterns, including an unusual Indian Ocean Dipole.

“Extreme heat is clearly influenced by human-caused climate change, which can influence fire conditions,” said Sophie Lewis, a Canberra-based climate scientist at the University of New South Wales, who contributed to the report. “There is evidence that Australian fire seasons have lengthened and become more intense, and extreme temperatures have played a role in this.”

More than 30 people were killed and at least 4,000 homes destroyed or damaged in the blazes, which reached a peak in December and January. Big cities on the eastern seaboard including Sydney and Melbourne were regularly choked by smoke and tourists in popular holiday spots forced to flee onto beaches, placing pressure on Prime Minister Scott Morrison to abandon his pro-fossil fuel agenda.

Morrison, along with some political allies, initially downplayed the role of climate change in contributing to the blazes, though has since acknowledged global warming as a factor and called for improvements to mitigation efforts. Still, Australia’s government has rejected the opposition Labor Party’s target of net zero emissions by 2050, pledging to avoid long-term goals and focus instead on developing emissions-reduction technologies.

New South Wales, Australia’s most populous state, this week recorded the first day since July without any active bush or grass fires, according to the region’s fire service.

For the first time since early July 2019, there is currently no active bush or grass fires in #NSW. That’s more than 240 days of fire activity for the state. #nswfires #nswrfs pic.twitter.com/NpjF3lAHKa
— NSW RFS (@NSWRFS) March 2, 2020

A rise in global temperatures of 2 degrees Celsius (3.6 degrees Fahrenheit) above pre-industrial levels as a result of climate change would make the type of weather conditions in place at the time of Australia’s fires at least four times more likely, according to the study, which involved researchers from the University of Oxford, the U.S. National Center for Atmospheric Research and other institutions.

The Paris climate accord targets a limiting of the global temperature increases this century to well below 2 degrees. Under current policies the rise is seen at 3.2 degrees. according to research from Climate Action Tracker. 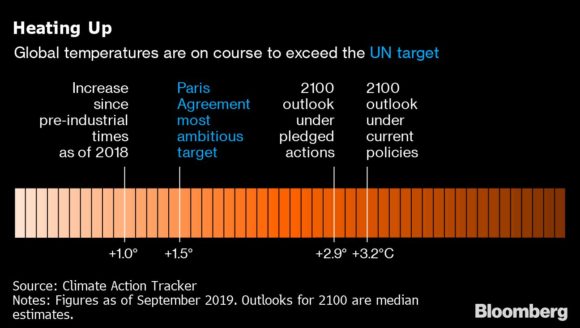 Previous work by Australia’s Bureau of Meteorology has found that climate change has contributed to more frequent extreme heat events and elevated fire danger. The country’s summers are now typically a month longer than they were in the 1950s, a factor that’s reducing the time available for controlled burnings to help prevent wildfires, the Australia Institute said in research published this month.

“There is a definite influence,” he told reporters on a conference call. “We think it could be much higher than that 30%, because all the biases in the models are towards an underestimation.”

–With assistance from James Thornhill.

Photograph: Fire and rescue personal prepare to use a hose in an effort to extinguish a bushfire as it burns near homes on the outskirts of the town of Bilpin on Dec. 19, 2019 in Sydney, Australia. Photo credit: David Gray/Getty Images.